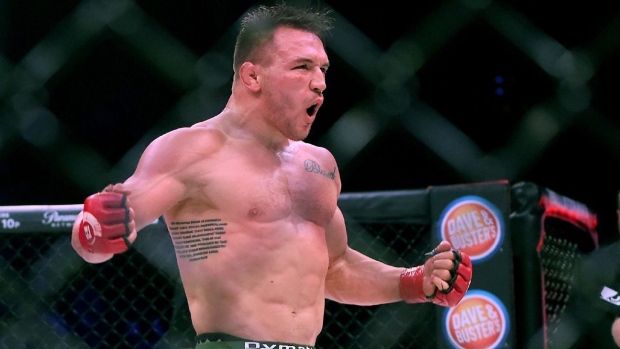 One of mixed martial arts' top talents outside of the Ultimate Fighting Championship is now inside of it.

Michael Chandler has officially signed with UFC, per Dana White on SportsCenter.

Chandler, 34, has been one of Bellator's top stars since debuting for the promotion in 2010, winning the lightweight title on three occasions. The High Ridge, MO native holds wins over the likes of Eddie Alvarez, Benson Henderson and Patricky "Pitbull" Friere.

He last fought at early August at Bellator 243, defeating Henderson for a second time by first-round knockout.

White says Chandler will be at UFC 254 in Abu Dhabi to serve as a backup fighter for the Khabib-Gaethje main event. Didn’t mention Ferguson and/or Poirier. There was talk yesterday that they would just move on.

White says that Chandler will be traveling to Abu Dhabi for UFC 254 on Oct. 24 to serve as a backup fighter for the main event in case one of lightweight champion Khabib Nurmagomedov or interim champion Justin Gaethje cannot fight.

An NCAA wrestler at Mizzou, Chandler has amassed a career mark of 21-5