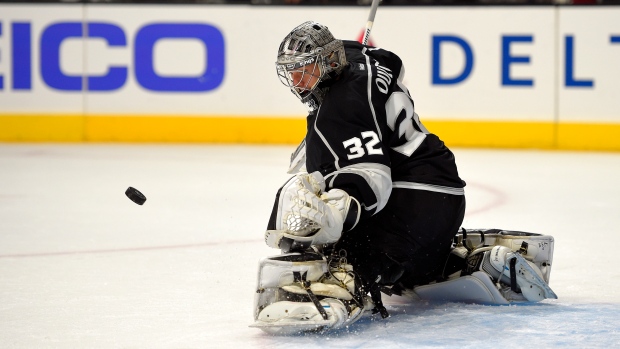 With the minnows of the regular season heading toward the draft lottery, we can start focusing our attention on the NHL playoffs - no doubt about it, the best time of the year.

One of the curious observations about this year’s pool of Stanley Cup hopefuls is that the goaltending position isn’t exactly set in stone for a number of clubs. Yes, everyone knows that the best goaltender entering the field of 16 plays in Manhattan, but beyond that there’s a fair bit of uncertainty. Some teams (Anaheim) are unsure of how a younger goaltender or two will hold up; other teams (San Jose) are preparing to rely on a platoon of talent to try to get them to the Promised Land.

I think the best example of this ambiguity is, well, the entire Western Conference. Think about how you individually would power rank the available goaltenders from the likely playoff teams. It’s not easy. Who is number one?  Maybe you think it’s Jonathan Quick of the Kings - he’s got the hardware, but then again, he’s been outplayed by guys like Michal Neuvirth and James Reimer in recent years. Maybe you think it’s Corey Crawford of the Blackhawks. He’s had an outstanding regular season, but it hasn't always gone smoothly - less than a year ago he was benched in a playoff game for journeyman Scott Darling. Maybe you think it’s Brian Elliott. He’s been exceptional in St. Louis despite having to do it on prove-it contracts after being discarded Ottawa and Colorado, all while battling the likes of Jake Allen for playing time.

I think you start to see my point. The group as a whole is very talented, but ranking one ahead of another is extremely difficult.

Perhaps the best way to articulate this is to visualize it. Below, I’ve mapped out every goaltender’s single-game (5-on-5) save percentages from the last four years. I’ve added error bars to help explain the variability and uncertainty with the data - this will be particularly important when it comes to measuring goaltenders with very limited games played against the guys who have been working the net night in and night out, and to applying appropriate levels of confidence based on the sample size each goaltender has provided.

Before you look at the results, think about all of the goaltenders heading in. How would you rank them? 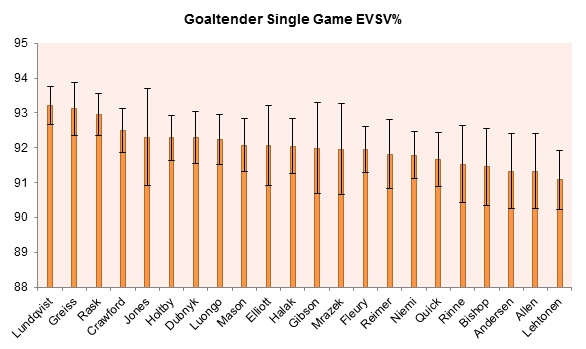 Now for some thoughts in no particular order:

1. I’m guessing most of you had Henrik Lundqvist in the top spot - this was the layup of the exercise. The interesting thing though is that we can only be 95 per cent confident (from our data sample) that he’s more talented than the following goaltenders: Marc-Andre Fleury, Antti Niemi, Jonathan Quick, Pekka Rinne, Ben Bishop, Frederik Andersen, Jake Allen, and Kari Lehtonen. That seems like a lot, but you’re talking about only half of the field here. Now, I’m pretty confident that Lundqvist is better than some of the other names I haven’t mentioned - perhaps a guy like Jaroslav Halak or James Reimer. But, at least at the 95 per cent confidence interval, we can’t argue it conclusively.

2. Here’s the good and the bad with Thomas Greiss: The good is that he’s been truly excellent when called upon over the last four seasons. The bad is he just doesn’t have a ton of action. If you are a believer that there’s inherent risk in handing the reins over to a guy who is fairly limited (at least compared to his peers) in the ice-time department, then you might be a tad worried if you are the Islanders. If you aren’t, then maybe there’s reason for optimism. Greiss has played better than many of his peers by raw performance. The Catch-22, of course, is that we are far less confident in his performance. That’s why his error bar is about 1.5 times the size of someone like Lundqvist.

3. I’ve written about the Corey Crawford thing in the past, but it’s time to start coming around on him as maybe one of the best in the West. There’s good reason to believe - really for the first time ever - that the goaltending has saved the Blackhawks’ bacon this season, and Crawford has been a massive part of that. If you are Chicago, I think you’re far less concerned about where his play goes, and far more concerned about what the rest of the team can accomplish.

4. I think the hardest decision for any team resides in San Jose. Do you go with Martin Jones or James Reimer? Reimer’s a bit more experienced. Jones has played a bit better in the games he has been given. There’s a decent chance either of them could play fantastic or explode. It’s not a dream scenario if you’re a coach looking for stability there, but both seem like decent options. Picking between the two, though, strikes me as pretty difficult.

5. And now for some fun matchup thoughts. Here is every possible head-to-head that would result in us being 95 per cent confident that one team has the better goaltending talent of the two: 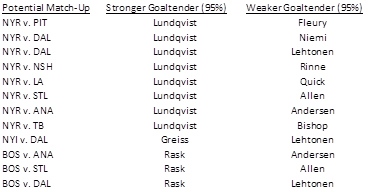 You’ll notice that there’s not a single matchup in which we can be 95 per cent confident that a Western team has a goaltending advantage over another Western team (the closest would be Crawford against Lehtonen). That’s why I suspect many of you have wide-ranging thoughts about the crease talent in that conference - if it seems to be all over the place, you aren’t wrong.