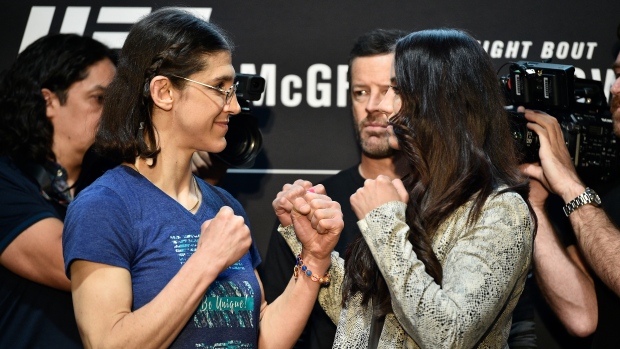 An undefeated phenom will face a veteran former title challenger to headline the UFC 246 prelims Saturday at 8 p.m. ET/5 p.m. PT on TSN3, TSN5 and TSN Direct from T-Mobile Arena in Las Vegas.

Maycee Barber puts her spotless record on the line against Roxanne Modafferi in the featured prelim bout.

Barber has defeated all eight fighters who have stood across from her, including three since earning her UFC contract on Dana White’s Contender Series.

The 21-year-old holds victories over Hannah Cifers, JJ Aldrich and Gillian Robertson, all via TKO.  She stopped Jamie Colleen on Contender Series to earn her way into the promotion.

Barber is on the record with her goal of becoming the youngest UFC champion in promotion history, hoping to surpass the mark set by Jon Jones, who captured the gold at 23 years and eight months old by defeating Mauricio “Shogun” Rua at UFC 128.

“I believe [this is the year], and if it’s not, than the beginning of next year,” Barber told TSN’s Aaron Bronsteter. “It just depends on how the fights and how the offers get worked out.”

After winning her first six fights in the strawweight division, Barber moved to flyweight. This will be her third fight at 125 pounds.

“I think [confidence] comes from putting in the work that we put in,” said Barber.  “When you’re working every single day towards your goals and your dreams, you can see them happening and therefore you can forecast what’s going to happen.”

Modafferi will try to stop Barber’s momentum and get back on the winning track, coming off a defeat at the hands of Jennifer Maia at Fight Night San Antonio last July.

“I think my technique is my advantage and I still have a chin, I can take a punch,” Modafferi told Bronsteter. “I think I’ll be able to weather any storm that she has, dish it right back out and take the win.”

The 37-year-old fought in the inaugural flyweight title fight at The Ultimate Fight Finale in December of 2017 after replacing Sijara Eubanks, who was ruled out after suffering kidney failure during her weight cut.

She lost a unanimous decision to Nicco Montano in the main event.

Modafferi competed on the 18th season of The Ultimate Fighter and made her UFC debut in a loss against Raquel Pennington at the finale.

She holds wins over Antonina Shevchenko and Barb Honchak in the UFC and an overall 23-16 MMA record.
Andre Fili will look for his third consecutive victory when he faces Sodiq Yusuff at the UFC 246 prelims. Fili has topped both Myles Jury and Sheymon Moraes during his current streak, with his since last loss coming to Michael Johnson in August of 2018.

Yusuff is on a five-fight winning streak, including his first-round TKO victory over Gabriel Benitez at UFC 241.

Tim Elliott will face Askar Askarov in a flyweight fight, and Drew Dober kicks off the prelims on TSN3 and TSN5 with a lightweight bout against Nasrat Haqparast.