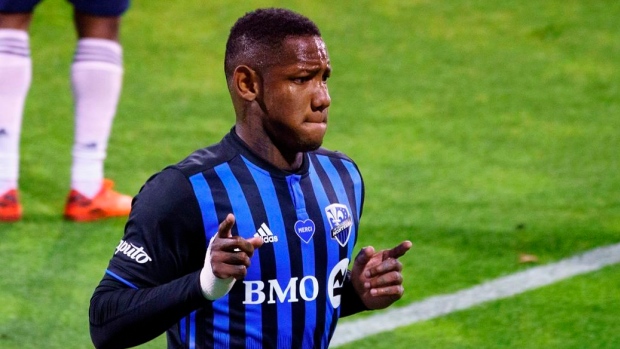 Preparing to play has looked a little different for the Montreal Impact over the past few weeks.

"But at the end of the day, it’s some more adversity added to all the adversity we’ve had this year.”

It's been a difficult season for Montreal. Border restrictions forced the team to relocate to Harrison, N.J., midway through the Major League Soccer season. Injuries to key players left the bench short and offensive woes left the team with a 8-13-2 regular-season record.

The Impact battled its way into the play-in round of the playoffs, then suffered a 2-1 defeat to the New England Revolution.

Now, nearly a month later, the squad is preparing to take on Olimpia in Champions League action. The tournament is being played in a "bubble" in Orlando.

Though Montreal has had several weeks between games, time spent in quarantine limited the squad to just five training sessions to prepare for Tuesday's game.

“Is it easy? No, but it is what it is and we can’t complain about it. We have to move forward," Montreal coach Thierry Henry said on a video call Monday.

“This year has been about trying to focus on what you can control, and at times, even that was difficult. But we’re here to perform.”

Tuesday will mark the second meeting between the two clubs, coming after Olimpia took a 2-1 win at Montreal's Olympic Stadium in March.

The previous game was a story of two halves for the Impact, Henry said.

Henry added that, in order to come away with a different result this time out, Montreal will need to take the game away from Olimpia.

"It's going to be a tough game against a team that's very physical, direct," he said.

Because the series is on aggregate, the Impact will need to score at least two goals in order to clinch a win. That could be a challenge for a Montreal side that will be without four of its top five scorers from MLS regular-season play.

Midfielder Saphir Taider was transferred to a Saudi Arabian club midseason, and Maximiliano Urruti and Lassi Lappalainen are both out with injuries. The club opted not to pick up an option on Bojan Krkic for next season and the Spanish midfielder in turn opted not to play for the Impact in the Champions League.

The Impact's top scorer Romell Quioto will be available, however. The Honduran international had eight goals and six assists in the MLS regular season.

As a former player for Olimpia, he's also been providing his teammates with crucial information on their opponents.

Defender Luis Binks has spoken to Quioto about what to watch for in Tuesday's game, but already knew the Honduran club is dangerous on the counter attack and has dynamic scoring threats, including striker Yustin Arboleda.

Olimpia also comes in with momentum, having won its last eight games in league play.

Montreal needs to stay sharp through all 90 minutes on Tuesday, Binks said.

“We can’t afford to not concentrate or not be at it for five minutes because, like we saw before, they can hurt us. And we don’t need that," he said.

While they know the matchup will be difficult, Binks said the Impact also believe the game is a winnable one.

“There’s no reason why we can’t beat this team," he said. “It’s not going to be an easy game but we’re more than capable of going through with the squad we’ve got.”

The Impact know they aren't favoured going in, but the players are all ready to step up and give their all, Sejdic said.

"Being an underdog is good. There’s a little bit less pressure if you’re an underdog," he said. "But we’re going in there with the mentality that we need to win, and we need to win by a margin. I think it’s going to be a good, healthy challenge for us."

This report by The Canadian Press was first published Dec. 14, 2020.