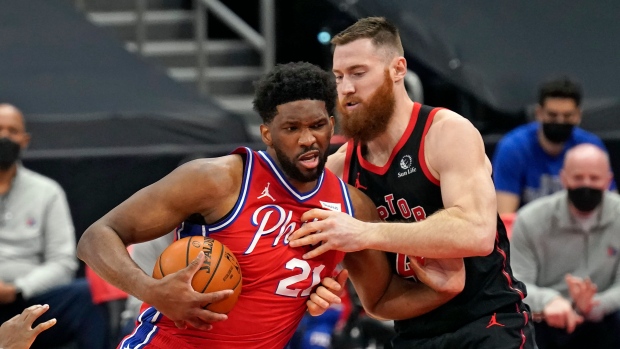 TORONTO – In the lead up to the first of two consecutive games against early-season MVP candidate Joel Embiid and his Eastern Conference-leading Philadelphia 76ers, Nick Nurse had a decision to make.

Following a slow and, at times, confounding start to the campaign, his Raptors team finally appeared to be turning a corner. They had won three straight contests, but unlike most of the shootouts they got themselves into earlier in the month, these victories came on the strength of their defence. They were rediscovering an old identity, but in a way that suited the new roster – flawed as it may be.

So, with the league’s most physically dominant big man on deck, the question was whether to stick with a variation of the small unit that had sparked their recent resurgence or match up with the size of their opponent.

“We’re going to see what we can do,” said Nurse, who remained coy roughly 90 minutes ahead of tip-off on Sunday. “We have a few game plans in mind.”

Although it seemed like he was leaning towards going back to Aron Baynes in the starting five, the Raptors’ head coach went all-in on the small-ball experiment. It was the ultimate contrast in styles – Philadelphia, with its big bruising centre in the middle and plenty of length and athleticism around him, and Toronto, with a lineup that featured 6-foot-9 Pascal Siakam as its tallest player and OG Anunoby as its acting centre, giving up almost half a foot and nearly 50 pounds in the match up with Embiid. And, in the end, it worked. Well, sort of.

With the Raptors falling behind in the first quarter, Baynes subbed in early. He wound up starting the second half, and went on to log 29 minutes off the bench – the most he’s played since the beginning of February. Still, regardless of whether they had their lone traditional big on the floor, they found a way to hold their ground and overcome the lack of size that held them back early in the year.

“The way we play, the way we scramble around, we’re doubling on the post, on the block, it doesn’t really matter what size the guy is that’s guarding Embiid,” Fred VanVleet said on the heels of his club’s impressive 110-103 win, improving to 16-15 and climbing above .500 for the first time this season. “If you can push him out far enough we’ll double and rotate out of that.”

“You’ve got to be able to adjust, not giving a steady diet of one thing the whole game and it’s give and take. As much as we might be out-sized, they still gotta keep up with our speed and flow offensively.”

During a season in which only a handful of teams have been able to separate themselves, particularly in the wide-open East, Embiid’s historic start has powered the first-place Sixers. Entering Sunday’s contest, the 26-year-old was averaging more than 30 points and 11 rebounds, with at least one steal and one block per game, while shooting almost 55 per cent. Only one player in NBA history has ever put up those numbers over the course of a full season – hall-of-famer Bob McAdoo, who did it twice in the ‘70s. Nobody has ever done it while shooting at least 40 per cent from three-point range, like Embiid is this season.

He’s always been capable of asserting his will and taking over games, but after years of underachieving, he’s finally healthy, in good shape and living up to his lofty potential under new coach Doc Rivers.

Toronto has always found ways of getting under his skin, though – neutralizing him in that memorable seven-game, second-round playoff series in 2019, or holding him scoreless for the first time in his career last season. While most of the credit would go to the primary defender, Marc Gasol – and rightly so – maybe there was more to it.

Without the luxury of being able to defend Embiid using single coverage, as they have with Gasol or Serge Ibaka in years past, the Raptors had to rely on their schemes and execute the game plan. Although Baynes saw the most time on Philly’s all-star centre, and did an admirable job, Nurse’s team threw multiple defenders at him, trapping him and forcing him out of his comfort areas on the floor. He scored 25 points on the night, but needed 20 shots to do it, hitting just six of his field goal attempts.

The Raptors may have started small, but it was actually the big lineup – with Baynes and Chris Boucher in the frontcourt – that held Embiid to 1-of-7 shooting in the fourth quarter, as the Sixers went more than seven minutes without a field goal and Toronto pulled away.

“We've had some good fourth quarters lately defensively,” Nurse said. “Man, if you're gonna play good D that's a good time to do it. We talk a little bit about how that's the most important time to get up and guard, and that’s got to be your maximum effort and leave it on the floor in that fourth, and we've been doing a pretty good job of that.”

There were pros and cons to either approach – staying small or going big – but Nurse has found something with the rotation he’s been using, and if it’s not broke, don’t break it. With its versatility, the small lineup has excelled defensively. It’s also enabled Nurse to shift Boucher to his natural position at the four alongside Baynes, who has looked better in a more suitable role coming off the bench. That duo punished Philly late in the game, with Boucher hitting five threes and scoring all 17 of his points in the second half.

Once again, defence is becoming their calling card. On Thursday, they held Milwaukee – the NBA’s second-ranked offensive team – under 100 points for the first time all season, with the small lineup swarming Giannis Antetokounmpo and frustrating the reigning two-time MVP in the Raptors’ second straight win over the Bucks. The following night, they pulled out a gritty, albeit ugly, 86-81 victory over Minnesota. They’ve done it all undersized and undermanned – playing without Kyle Lowry, who’s missed the last three games with a sprained left thumb.

Suddenly, the Raptors – who were in the league’s bottom third in defensive efficiency last week – are ranked 12th in that category. They’re also climbing the East standings. Six weeks ago, they were 2-8, tied for the worst record in the NBA. Since then, they’re 14-7, with signature wins over all four teams that remain ahead of them – Indiana, Brooklyn, Milwaukee, and now Philadelphia. With Sunday’s win, and Boston’s overtime loss to New Orleans earlier in the day, they passed the Celtics for fifth place and are mere percentage points behind the Pacers for fourth. Only four games separate them from Philly atop the conference.

“I think we knew who we could be all along, that was the frustrating part about the way we started,” said VanVleet – he and Siakam led Toronto with 23 points apiece against Philadelphia. “But like I’ve been saying since the beginning it’s a long year, there’s a lot of basketball in front of us, and we’re just sticking with it and continuing to try to get better each day, each game. There’s going to be ups and downs but I think that we’re finding ourselves and creating an identity. You need to create an identity each year and it just feels like that we’re finding that here of late, but we’ve got to keep it going.”​