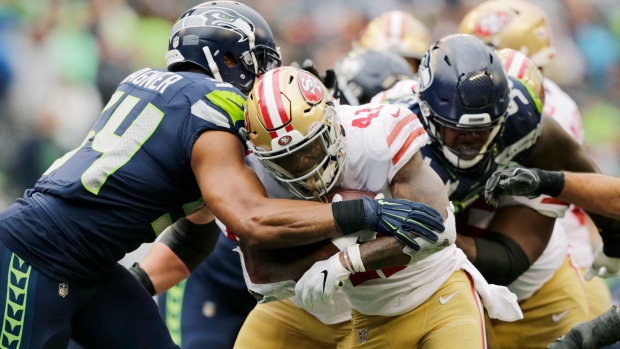 SANTA CLARA, Calif. — Jeff Wilson is making the most of his chance in San Francisco's injury-riddled backfield.

After starting his rookie season as an undrafted player on the practice squad, Wilson will be thrust into a starting role this week after the latest injury to a 49ers running back.

Wilson showed he might be up to the task with a strong performance in his first extensive action as a pro last week in Seattle. He rushed for 61 yards on 15 carries and caught eight passes for 73 yards as one of San Francisco's few bright spots in a loss to the Seahawks.

His physical running style sparked the Niners (2-10) out of a sluggish offensive start on a day leading rusher Matt Breida injured his ankle in warmups and managed only limited action.

"That's his style. That's what got him an opportunity in this league," coach Kyle Shanahan said Wednesday. "That's what he does best. That's why he's going to make it. I hope he doesn't lose that, for his and our sakes. He runs hard and that's what he does good. Hopefully, we can keep him healthy and he keeps getting better and better."

Wilson wasn't supposed to have this big a role as a rookie. He signed with San Francisco as an undrafted rookie out of North Texas last spring and was far down the depth chart at the start of training camp.

But projected starter Jerick McKinnon went down with a season-ending knee injury a week before the opener, backup Raheem Mostert then went down with a broken arm on Nov. 1 and now Breida is out this week against Denver with the injured ankle.

That has given Wilson a chance to play and show what he can do down the stretch run of a lost season for San Francisco.

"I'm just trying to do my job," he said. "I don't have any personal goals. I just love and enjoy playing football. As long as I do that, it will be good for me."

Wilson was lightly recruited out of high school and ended up at North Texas, where he ran for 3,204 yards in four seasons. He went undrafted but was attracted to the Niners because of the success running backs coach Bobby Turner has had with unheralded backs during his lengthy career in the NFL.

Wilson bulked up a bit since joining the 49ers and has impressed his coaches with a physical running style.

The pleasant surprise for the 49ers has been at how quickly Wilson has adapted to the passing game. He caught just 70 passes in four seasons in college, but showed a good ability to be a threat in the screen game with eight catches last week.

He said he's worked extremely hard at improving that aspect of the game and the results have been clear.

"He's done a great job of learning the offence, running, blocking, pass routes," quarterback Nick Mullens said. "He can do a little bit of everything and once he got his opportunity, I think everybody saw how hard he runs. That fires me up. He brings it every carry that he's going to get. So, I think Jeff is ready to step in and take that role on for sure."

NOTES: Shanahan changed up the practice schedule, having the players come in an hour early and leave earlier in the day. Shanahan said he just wanted a change, although he did notice players being a little more groggy at the opening meeting at 7 a.m. "Sometimes, you've got to yell a little bit more to make sure they're attentive in the early meetings because they're not all drinking as much coffee as the coaches are," he said. ... The Niners signed long snapper Colin Holba to replace the suspended Kyle Nelson. ... Edge rusher Pita Taumoepenu was promoted from the practice squad to replace the injured Dekoda Watson, who went on IR. ... Breida (ankle), safety Jaquiski Tartt (stinger), C Weston Richburg (knee) and LT Joe Staley (rest) didn't practice.