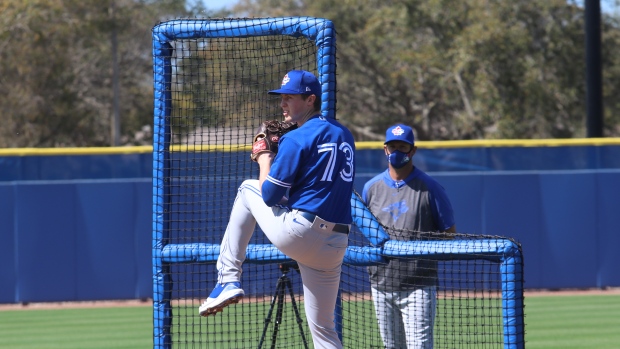 TORONTO — As the Toronto Blue Jays search for ways to get enough outs from their pitching staff to matter this season, many arms who don’t appear on the opening day roster are sure to get chances.

With that in mind, Joey Murray is a name to pay close attention to.

While the 24-year-old eighth-round pick from the 2018 draft is an overlooked name at this point and isn’t yet on the 40-man roster, leaving him with a near-impossible battle to crack the team out of camp, Murray’s elite spin-rate fastball has led to the right-hander piling up strikeouts for nearly three years now.

After leading the organization in Ks in 2019 across three minor-league stops, Murray continued whiffing batters at the alternate site in Rochester last summer, this time with some added juice on his heater.

With a unique high-spin offering that creates a rising effect and has confused hitters at every stop, the organization — and Murray himself — were clearly excited when that fastball started ticking up into the 91-93 mph range.

It happened almost by accident on a hot summer day in upstate New York at the alternate site.

“It was kind of crazy how everything happened,” Murray recalled. “Even right now, I’m not considered a hard thrower, but I always wanted to throw harder and, for me, whenever I tried to throw harder I would kind of tense up and I would end up throwing slower. We were in the bullpen one day and one of the pitching coaches said, ‘Try to throw this one with just 80 per cent effort.’ I did and it ended up coming out 91 in the bullpen. Basically, what happened was I was moving slower but everything was so on time that I was able to convert the force better down the mound … that was kind of the reason for my velocity jump, pretty much overnight.”

From there, they went to work refining things, and during his Grapefruit League debut Sunday against the New York Yankees, the newfound velocity was on display, as the Kent State product averaged 91.2 mph on his seven four-seamers, topping out at 93.

Even a fraction of a second less for a hitter to pick up the well-hidden, spin-ridden offering will only help Murray continue to succeed once he finds his way to a major league mound.

He accidentally discovered he was a spin-rate darling, too, when a curious scout posed a question to him in the summer of 2017 when he was pitching in the prestigious Cape Cod League, a wooden-bat circuit that scouts flock to every year in order to see the top talent in a more pro-style environment.

“I believe he was from the Yankees, and he was just like, ‘Do you know why you’re throwing 86 to 88 (mph) and guys are swinging and missing at it?’” Murray said. “I had no idea why, and he was like, ‘Well, if we draft you, we’ll be sure to tell you why.’ That was kind of the first experience I had with spin rates or anything like that and I started getting the idea that I was actually a bit different and not just getting lucky out there.”

In an age where velocity is king, Murray is definitely different.

But outs are outs and the spin-rate movement has allowed players and teams to figure out why differing styles can produce results.

The Jays have been a team that frequently targets pitchers, especially on the waiver wire, with spin-rate profiles.

For Murray, attacking the top of the zone with his fastball is the key, and Blue Jays pitching coach Pete Walker believes it will continue to play at the major-league level.

“It doesn’t really come along very often when you think about it, I mean, just somebody that just seems to get a lot of swings on his heater,” Walker said. “So that makes it exciting, plus he can spin the breaking ball really well. But he definitely generates swings without an overpowering fastball velocity-wise, so it’s always interesting. He’s got that invisible fastball almost, you know?

“When hitters know you have that kind of pitch and you can throw it for strikes at the top part of the zone, they have to honour it — they have to swing — so it just gets them in swing mode and that’s when the secondary stuff can become really effective, as well.”

Murray’s curveball is his second best pitch, a hook that he can bury in the bottom part of the zone.

He’ll also mix in a changeup and a cutter/slider type offering to keep hitters off balance.

“That little jump in velo is going to help, but it’s almost like an additive because he certainly had good enough stuff to compete and pitch at the major league level already,” Walker said. “I’m curious to see how that added velo plays out during the course of this year. He’s definitely an exciting young arm, kind of unheralded and underrated, I think, in the minor leagues. The swing-and-miss, the fastball spin rate, the breaking stuff, I mean, he’s got plus pitches that can all get major-league hitters out, which is exciting. He’s probably not the most hyped-up prospect but he’s certainly on our radar and someone that’s opened some eyes here in camp.”

As a very basic primer on four-seam fastball spin rates, anything over 2,600 rpm is elite and the numbers against those pitches are proof in the pudding — batting averages against drop significantly.

Murray is into the technology and data, but he’s also trying to improve on some pitching basics this spring, too, like throwing more strikes and getting ahead.

“Right now, we’re basically just focused on pumping strikes,” Murray said. “Numbers-wise, I haven’t been great with strikes, but I haven’t been horrible in that aspect. Walks could definitely improve for me. Letting my stuff play in the zone and just trying to get ahead of hitters.”

While Murray is being developed as a starter and will likely begin the year with the Buffalo Bisons when the newly-formed, 20-team Triple-A East circuit gets going April 6, there’s always the chance he could pitch out of the bullpen later this year as a way of getting his feet wet when he arrives in the big leagues.

“He certainly could break in in that sort of a role, but for right now he’s starting and he’s focusing on that, taking the ball every five days, wherever that is,” Walker said. “But he is a guy that’s intriguing because of the swing and miss and the potential to fill a long spot in the ‘pen, as well.

“He has the ability to strike guys out, make guys look bad, and he’s got an interesting pitch mix. He is someone who could move into the picture pretty quick.”

Murray, who has just eight Double-A starts of upper minors experience under his belt, isn’t worrying too much about roster spots right now.

He’s just focusing on what got him to this point.

“I’m just kind of going about my business, trying to strike everybody out and make some noise.”​