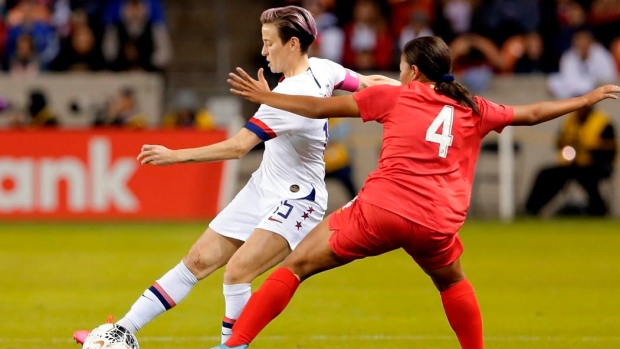 US downs Panama 8-0 in Olympic qualifying tournament , The Canadian Press

Panama goalkeeper Yenith Bailey got tangled up with one of her own players and Horan took advantage, scoring in the third minute to give the World Cup-winning Americans the early lead.

Moments later, Bailey knocked heads with Jessica McDonald and spent several moments on the ground. But ultimately Panama's captain stayed in the game.

Some two minutes after Lynn Williams' goal in the 16th minute, Horan scored her second of the game. Rose Lavelle got her first goal since the World Cup final to make it 4-0 in the 21st.

Bailey was stretchered off in the 32nd minute. It was unclear if it was because of the earlier collision.

Christen Press scored her third goal in as many games in the 70th minute before McDonald's goal in the 72nd to make it 6-0. Tobin Heath, who came in as a substitute, added a no-look goal and Horan capped the scoring by completing her hat trick in the 81st.

The crowd at Houston's BBVA Compass Stadium was announced at 14,121.

The top-ranked U.S. team also defeated Haiti 4-0 in the group stage opener on Tuesday night. The Americans face Costa Rica in their group final on Monday.

Costa Rica down Haiti 2-0 earlier Friday at for its second win in the group.

Eight teams are playing in the tournament, with the top two teams from each group advancing to the semifinals in Carson, California, on Feb. 7.

The top two finishers in the tournament will earn the region's berths in the Tokyo Games this summer.

The U.S. has qualified for every Olympics since women's soccer was introduced in 1996. The team has five consecutive titles in the qualifying tournament.

Six teams have already made the field for Tokyo: Japan, Brazil, Great Britain, the Netherlands, Sweden and New Zealand.