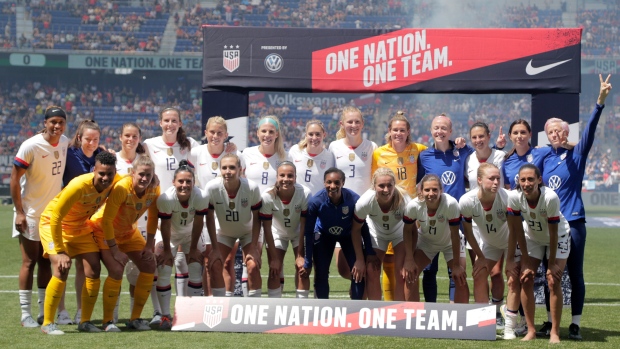 HARRISON, N.J. — Fans spelled out the message at the end of the national anthem, unfurling a huge banner behind the goal on the south end of Red Bull Arena: "ONE FOR ALL AND ALL FOR FOUR" it read, with a large gold star in the centre.

Ten prep games for the U.S. women's soccer team this year ended with an unimpressive 3-0 win over Mexico in a send-off match on Sunday. The Americans travel to England on Monday and will work out at Tottenham's training grounds before heading to France on June 7, four days before starting their World Cup title defence against Thailand.

Seeking their fourth World Cup title, the top-ranked Americans have seven wins and two draws since a Jan. 19 loss at France, outscoring opponents 28-8. That defeat ended a 28-game unbeaten streak and the current run has been largely against lesser opponents, but confidence is high. After playing No. 34 Thailand, the U.S. closes group play against 39th-ranked Chile and No. 9 Sweden.

"Pressure is starting to build, and I think for us it's just getting more real and that's why we're excited to go over to London because we're going to be away from all the distractions and it's just going to be us and the tournament ahead," star forward Alex Morgan said.

During training next week in London, more focus is likely to be a few pitches away on a Spurs side preparing for its first Champions League final, against Liverpool on June 1. Team bonding will be as important as training.

"So much of it is a mindset and an approach," U.S. coach Jill Ellis said. "There's a lot of good teams and we're all aware of that, but want to be the team to beat."

Mexico failed to qualify after consecutive group stage eliminations, is ranked 26th and fielded a relatively inexperienced team mixed with a few veterans. But while the Americans had a 25-3 advantage in shots — including 11-0 on target — they struggled to score against an inferior rival.

Tobin Heath was gifted her 30th international goal in the 11th minute when she ran onto a pass from goalkeeper Cecilia Santiago to unaware defender Rebeca Bernal.

After the U.S. misfired in front of the net on a hot afternoon that displayed failings more than facets, the Americans pulled away on the strength of second-half substitutes. Mallory Pugh knocked in a short cross from New Jersey native Carli Lloyd in the 76th minute for her 16th goal. Twelve minutes later, Christen Press took a pass from Julie Ertz, spun and faked a defender to score from the top of the penalty area for her 48th.

"We can definitely be sharper in the final pass and inside 18," Ellis said. "This group creates a lot and they're very potent, and I think in time we wear teams down."

A crowd of 26,332 filled the third straight send-off match at Red Bull Arena, about the same as the 26,467 for a 0-0 draw against South Korea four years ago and markedly higher than the 5,582 for a 1-0 victory over Mexico in 2011. Young girls shrieked as players came off the team bus to enter the stadium.

Players repeatedly speak of their responsibility as role models and need to grow the sport and push for equality — a reason they have sued the U.S. Soccer Federation for gender discrimination. They drew 22,788 for a 3-0 victory over South Africa at Santa Clara, California, on May 12 and 35,761 four days later for a 5-0 romp over New Zealand in St. Louis, then spent much of the past week engaged in media interviews and promotion in New York. Morgan was featured on Time magazine's cover.

"There's so many things bigger than soccer that we want to draw attention to. So it's really part of the job that we have," she said.

Rapinoe, the team's most outspoken player, laughed as she said: "I'm happy to be leaving the country."

Rapinoe smiled when asked about her dye job.

"It's pretty in right now, so I jumped on that vine," she said. "It's just something fun. Actually, I did it and then it was like a really light pastel colour, so then I had to get my own and I did it in the hotel room."

Ellis made one change from the starting lineup she used in the previous two exhibitions, starting Samantha Mewis in central midfield in place of Lindsey Horan. Alyssa Naeher was in goal, with Kelley O'Hara at right back, Becky Sauerbrunn and Abby Dahlkemper in central defence and Crystal Dunn at left back. Ertz was the defensive midfielder in the 4-3-3 formation, with Mewis and Rose Lavelle in central midfield. Morgan headed the attack, flanked by Rapinoe on the left and Heath on the right.

Press, Lloyd, Pugh and Allie Long entered after halftime for Sauerbrunn, Rapinoe, Morgan and Dunn, and Heath moved from right wing to left back.

The U.S. heads to Europe with four straight shutouts. Naeher, Hope Solo's successor, was in goal for all but 45 minutes.