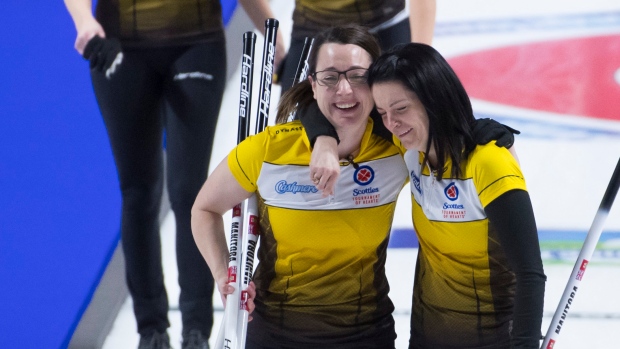 MOOSE JAW, Sask. – It took some extra drama, but Val Sweeting has finally reached the top of the Canadian curling mountain.

“I’ve had quite a few heartbreaking final losses, so I definitely needed that,” an emotional Sweeting said after the game. “It’s hard to get back up, but we did and got back to that final.

Einarson, who also won her first Scotties on Sunday after dropping the 2018 final to Jennifer Jones in Penticton, B.C., says she couldn’t be happier for Sweeting.

“Val is such a wonderful player. So smart and talented. Her and I together, I think work really well,” said Einarson. “We’ve come a long way. We really focused on the little things that matter.”

The 32-year-old Sweeting has had her fair share of heartbreak at the Canadian championship in the past. Sweeting skipped Alberta to back-to-back national finals in 2014 and 2015, losing both times to Homan and Jones respectively, with the latter final happening right here at Mosaic Place. Those Moose Jaw Scotties were the last Sweeting competed in until this week.

Sweeting lost in the next two Alberta provincial finals (2016 and 2017) before dropping the page playoff 3 vs. 4 game in 2018. Her heartbreak wasn’t restricted to just traditional curling either. Sweeting and teammate Brad Gushue made it all the way to the 2018 Canadian Olympic Mixed Double trials finals before losing to John Morris and Kaitlyn Lawes. That tandem would go on to win the first ever gold medal in that discipline in Pyeongchang, South Korea a few months later.

“It was heartbreaking for sure. I didn’t know how many times I could get back up,” said Sweeting of all those losses. “It just shows that you have to and I’m so honoured to get that Maple Leaf.”

At one point Sunday it seemed it was going down the same nightmarish route once again.

Manitoba held a four-point lead with two ends to play. Homan put up a deuce in the ninth before Einarson was heavy on her last throw in the 10th, giving Ontario a steal of two and a tie game.

Sweeting says she didn’t let her mind go to a dark place.

“Maybe for a second,” said Sweeting, who shot 83 per cent in the final. “I just thought ‘oh that sucks.’ I knew that we would regroup and have a really strong 11 and ultimately just leave the skip the four-foot. Kerri played amazing all week. Especially through playoffs and our last games.”

Einarson executed on a similar shot in the 11th end to win the Canadian title.

“What an emotional roller coaster,” said Einarson. “This is so amazing. I’m so incredibly proud of my teammates and they played so well all week. If it wasn’t for them I don’t know where I’d be today."

Shannon Birchard, the second on the team, said they won this one for Sweeting and their skipper.

“We said before the game ‘we’re doing these for Val and we’re doing this for Kerri,’” said Birchard, who was on that Jones’ 2018 Scotties team as a replacement for Lawes. “For those two, losing the national final, it must have been heartbreaking. We just really wanted to do it for them this week.”

Sweeting’s first national championship came in her home province as she was born in Redvers, Sask., and has lived in Edmonton for many years as the team’s lone out-of-province curler. Sweeting says she could feel the support from multiple parts of Canada despite wearing the buffalo.

“Although I had the Manitoba logo on, I felt like I was representing everybody and I felt that support from everybody,” she said.

This rink out of the Gimli Curling Club made headlines when they formed prior to last season as Einarson, Sweeting, Birchard and lead Briane Meilleur were all skips of their own teams prior to coming together.

Birchard and Meilleur weren’t major contenders on the elite curling level circuit, so their moves weren’t shockers, but Sweeting’s swap to the third position was surprising. Could all these skips work together? Were there too many cooks in the kitchen?

“I think we all really owned our positions,” said Sweeting. “We really bought in and learned what we needed to do in each of our roles.”

In their first campaign together 2018-19, Team Einarson won multiple times on the World Curling Tour, but lost to Team Tracy Fleury in the Manitoba final and then lost the Scotties Wild Card game to Team Casey Scheidegger in Sydney, N.S. A good first season, but Sweeting knew they could reach another level.

“I think we really identified a lot of little things this season that we wanted to work on and I think we just owned them,” she said.

Birchard says all four teammates having a skip mentality can be an advantage.

“I know that Briane and I are always thinking about strategy. We’re always keeping everything in check and Val as well. It just helps. It’s definitely a team effort out there,” explained Birchard.

Now, Team Einarson will trade in the yellow and black for red and white as they will represent Canada at the world women’s curling championships next month in Prince George, B.C.

“We’ve got some work to do,” said Sweeting. “There’s so many good teams there and we’ll draw on players who have had experiences there and good coaching. We’ll just work really hard and do everything we can to bring a medal back to Canada.”