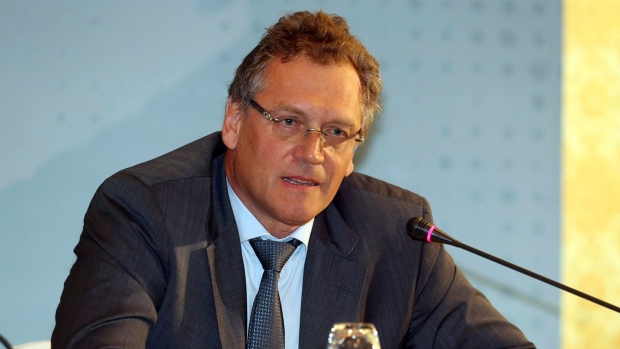 As of Sunday evening, Valcke had been slated to attend Thursday's event in Vancouver along with Canadian and other officials. But that changed Monday afternoon.

"Due to the current situation, FIFA secretary general Jerome Valcke will not be attending the opening of the FIFA Women's World Cup Canada 2015 as previously scheduled," FIFA said in a release. "It is important that he attends to matters at FIFA's headquarters in Zurich."

The world governing body of soccer has been rocked by arrests and indictments on both sides of the Atlantic prompted by allegations of corruption from the FBI and U.S. Department of Justice.

American investigators believe the money was paid as a bribe in exchange for Warner and others voting to give the 2010 World Cup to South Africa.

The Times said Valcke said in an email that he did not authorize the payment and did not have the power to do so. In a statement, a FIFA spokesperson said the payment was authorized by the then-finance committee chairman, per FIFA regulations. The chairman, Julio Grondona, died last year.

The opening news conference is to provide "an overview of the preparations as well as present their expectations of the tournament," according to FIFA.

The media availability follows a meeting of the Committee for Women's Football and the FIFA Women's World Cup.

Valcke has been FIFA's point man for the tournament. He was the top FIFA official at the World Cup draw in December at Gatineau, Que., and was the chief spokesman for soccer's world governing body on the legal challenge to the use of artificial turf at the tournament.

A FIFA spokesman said Valcke's future travel plans will confirmed "in due course."

FIFA president Sepp Blatter is expected to attend the final in Vancouver.