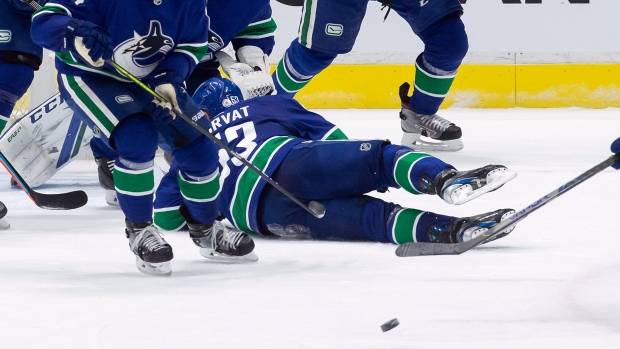 Injury Update: Bo Horvat will not return to tonight's game.

The Canucks centre appeared to take a shot off the foot early in the third period and skated to the bench and down the tunnel in obvious pain.

This now means all four of Vancouver's opening night centres -- Elias Pettersson, Brandon Sutter, Jay Beagle and now Horvat -- are currently out of the lineup.

Head coach Travis Green did not have an update on Horvat after the game. He will be re-evaluated on Tuesday.

Horvat played 14:04 of ice time before leaving and did not record any goals or assists. The Canucks went on to drop Monday's game 4-0.

The 25-year-old has 14 goals and 12 assists in 36 games for the Canucks so far this season. This is his seventh season with Vancouver after being selected No. 9 overall in 2013.

The Canucks will be back in action Tuesday night also against the Jets.