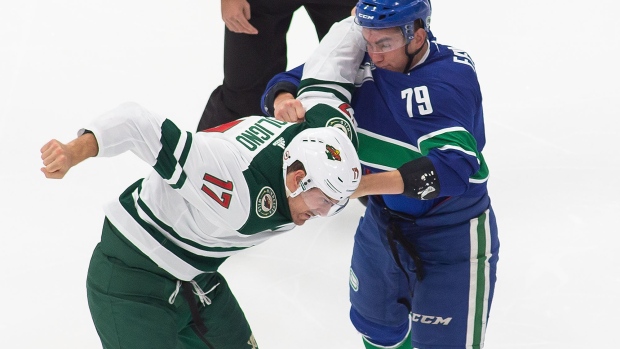 Vancouver’s Micheal Ferland has been fined $5,000, the maximum allowable under the CBA, for Spearing Minnesota’s Ryan Hartman.

It is the maximum monetary penalty allowed under the current collective bargaining agreement.

During Minnesota's 3-0 victory Sunday night, Ferland's stick was grabbed by a member of the Wild and Ferland responded with a spear.

Ferland was also involved in a fight with Minnesota's Marcus Foligno Sunday night.

In 14 games with the Canucks this season, the 28-year-old had one goal and four assists.

Meanwhile, NHL Player Safety also announced the Luke Kunin of the Wild has been fined $1,000 for unsportsmanlike conduct against Vancouver.

Minnesota’s Luke Kunin has been fined $1,000, for unsportsmanlike conduct during last night’s game against Vancouver.

The two teams will be in action once again on Tuesday evening.