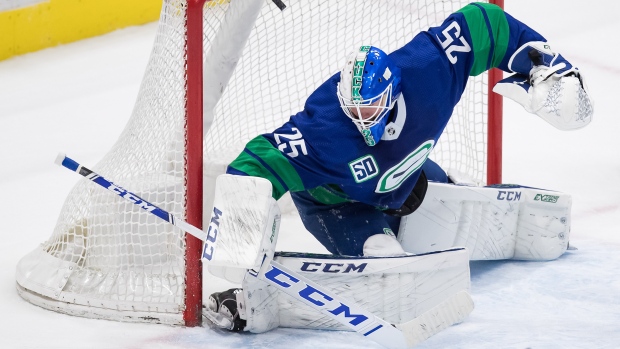 VANCOUVER — An injury to goaltender Jacob Markstrom triggered the Vancouver Canucks' only deal at the NHL trade deadline.

Benning told reporters that Markstrom suffered a lower-body injury in Vancouver’s 9-3 win over the Boston Bruins last Saturday. Markstrom initially felt well enough to travel to Montreal with the Canucks on Sunday ahead of a four-game road trip that begins Tuesday.

"He went and did an MRI this morning," Benning said. "He's flying back (Tuesday) to meet with our doctors Wednesday morning. We'll have a better timeline after that."

Domingue, 27, will join the Canucks in Montreal. He is expected to back up Thatcher Demko against the Canadiens on Tuesday.

Drafted in the fifth round in 2010 by the then-Phoenix Coyotes, Domingue was acquired by the Devils from the Tampa Bay Lightning on Nov. 1. In 16 games with New Jersey this season, he posted a 3-8-2 record with a .882 save percentage and a 3.79 goals-against average. He cleared waivers last week and was assigned to the American Hockey League's Binghamton Devils.

With the Canucks in the thick of a tight playoff race in the Pacific Division, Demko will be asked to carry the load while Markstrom is sidelined. Demko, 24, is in his first full season with the Canucks. In 20 games, he has a 10-6-2 record with a 3.03 goals-against average and .905 save percentage.

"We've been working with Thatcher Demko now for a year and a half," Benning said. “"He's played good goal for us.

"Our team has confidence in him. This is an opportunity for him to step in and play like he's played for us all year."

With 21 games left on their regular-season schedule, the Canucks sit third in the Pacific Division. They're four points behind the division-leading Vegas Golden Knights and two points ahead of the Calgary Flames and Arizona Coyotes, who currently occupy the first and second wild-card spots in the Western Conference respectively.