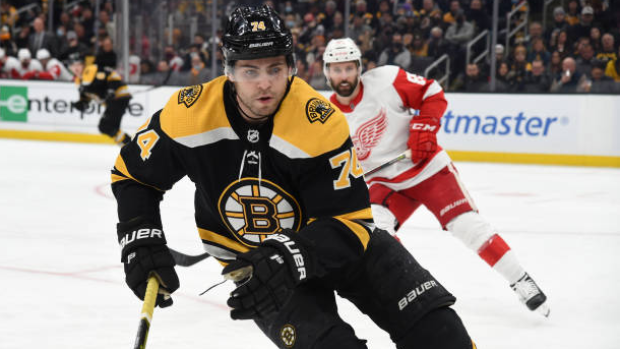 The Jake DeBrusk sweepstakes appear to be heating up and TSN Hockey Insider Darren Dreger reports the Vancouver Canucks are among the teams to check in with the Boston Bruins regarding the disgruntled winger.

Dreger notes the Montreal Canadiens and Calgary Flames may also be among the teams to make a phone call on DeBrusk, whose trade request became public earlier this week. A trade, however, could take some time to materialize with the Bruins currently shorthanded.

"As many as 12 teams, maybe more than 12 teams have already checked in on the Jake DeBrusk situation with the Boston Bruins, but the reality is the Bruins now need Jake DeBrusk in their lineup," Dreger said Tuesday on Insider Trading. "They've got Brad Marchand suspended, their American Hockey League team in Providence is dealing with a COVID issue, so they need him on the ice right now.

"I would say the New York Rangers are among the teams that have expressed some interest. You've got the Vancouver Canucks, maybe Montreal, maybe Calgary. Certainly Arizona. Go down the list. Historically speaking, when there's been other Jake DeBrusk trade situations and speculations, the St. Louis Blues have been near the top of that list as well.

"You talk about a kid who could score 20 to 25 and he's scored 16 times in the playoffs. So those stats matter."

DeBrusk's agent, Rick Valette, confirmed to TSN's Ryan Rishaug on Monday that he made the request over the weekend and feels a "change of scenery moving forward would be beneficial" for the 25-year-old Edmonton native.

After sitting out as a healthy scratch for Sunday's win over the Canucks, DeBrusk returned to the lineup Tuesday against the Detroit Red Wings, failing to record a point in 10:25 of ice time in the 2-1 loss. The 2015 first-round pick has recorded just three goals this season, with six points in 18 games.