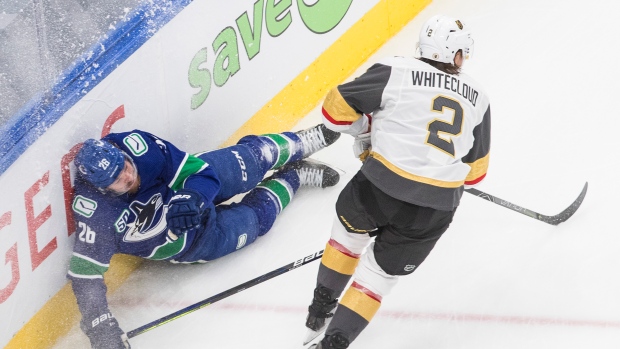 No team has been a more pleasant surprise during the Stanley Cup Playoffs than the Vancouver Canucks – a young, entertaining team whose franchise players have generally looked fantastic against tough competition.

And no organization has endured a more compelling lesson than those same Canucks, a team on the brink of elimination after Vegas’ furious Game 4 comeback on Sunday night.

For the Canucks, this series is something of found money. The roster is still transitioning under general manager Jim Benning and head coach Travis Green, and the thought of this team winning a playoff series – let alone two – last October would have been hard to believe.

But their younger players have been a step ahead of the development curve for some time, and it’s fostered serious excitement about what the next few years could look like in British Columbia.

It’s easy to forget that this team is very much a work in progress – a team still trying to navigate muddy salary cap water, and one in need of a skill influx further down the lineup. Vancouver’s depth players were able to tread water against Minnesota and St. Louis, while their stars exploded in the offensive end of the rink. But it has been a very different story against Vegas.

While the Canucks continue to try and squeeze every drop of production possible from their stars, the Golden Knights run four seemingly interchangeable lines and three interchangeable defensive pairings that play a fast, physical north-south type of game.

That depth advantage has manifested itself emphatically in the series. From time to time, you will see painfully long Vancouver shifts where the Canucks are bottled up in the defensive zone (like defenceman Tyler Myers’ 2:18 second-period shift in Game 4), usually the result of fatigued top lines or overpowered depth players who can’t break out of the zone.

The ice has been, in one word, tilted: the Golden Knights have 60 more shot attempts and 28 more scoring chances at even strength this series, and have outscored the Canucks there 11 to five.

For Vegas, tremendous depth diminishes the pressure on any one line to deliver. Play most of your shift in the offensive zone – regardless of who is on the ice and who you are playing against – and the numbers are going to win out.

At a matchup level, that just keeps happening over and over in this series: 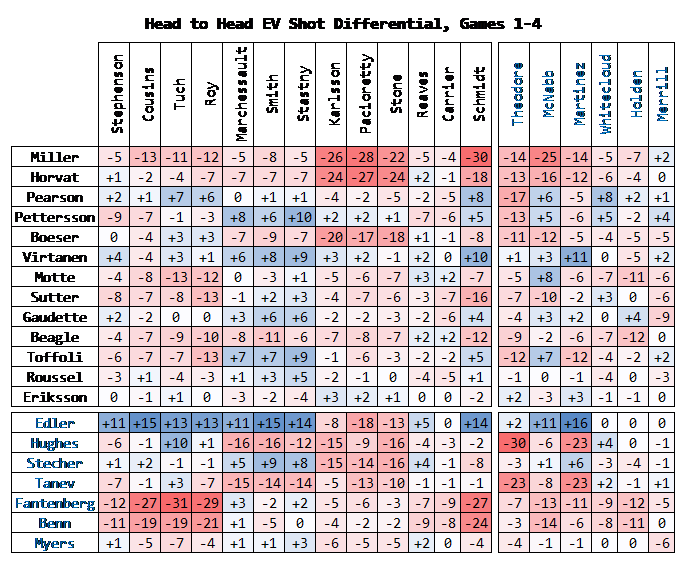 It’s easy to draw your eyes to what the Mark Stone, Max Pacioretty, and William Karlsson trio is doing to some of Vancouver’s best non-Elias Pettersson forwards. Running up a nearly 30-shot advantage in 25 minutes of head-to-head ice time is domination, and it’s hard to win games when your best players spend so much time defending the run of play.

But the more important point – and the reason why Vegas just looks a superior team in this series – is that Vegas doesn’t really mind any matchup in this series.

By way of example: Chandler Stephenson and Nick Cousins are leading Vegas in even-strength ice time, and superstar winger Stone has played all of three minutes more than fourth-line quasi-enforcer Ryan Reaves. In fact, Vegas’ depth players have been dominant against any combination of Vancouver forwards.

I think most of this is just a math problem. There is not a single shift where the Pettersson line is catching a break – they are either dealing with an equally capable top six, or have to work through a combination of hyper-aggressive forechecking and a counterattacking speed game from the Golden Knights’ bottom six.

The opposite side of the coin is also problematic: the Stone line against Vancouver’s depth forwards is a nightmare, and Green knows it.

So what happens? Green shields his depth players as much as he can. Series-to-date, skaters like Tyler Motte, Tyler Toffoli, Jay Beagle, Loui Eriksson, Brandon Sutter, Adam Gaudette and Antoine Roussel have averaged just four minutes of ice time against Vegas’ top line.

It would be premature to print the death certificate on Vancouver’s season – if we have learned anything from the young core and goaltender Jacob Markstrom, it’s that they are game in times of adversity. But regardless of how the series concludes, Vegas has taught Vancouver an important lesson about how vital depth is in the modern era of hockey.

This Canucks team can become the next big thing in hockey. But it’s going to require a bit of an overhauling of the bottom half of the lineup in order to get there.