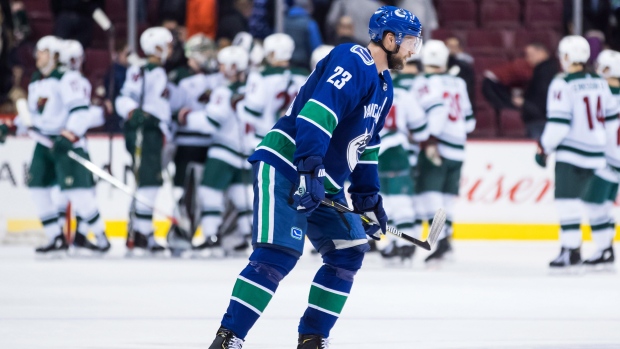 Alexander Edler is sticking around.

The Vancouver Canucks’ longest-tenured player has signed a two-year extension with the club, the team announced on Wednesday.

The deal carries an average annual value of $6 million per season, up from the $5 million per earned during his six-year pact signed in 2013 that Edler just completed.

"Alex is important to our team and has played as the cornerstone of our defence throughout his career," said Canucks GM Jim Benning in a statement. "He's a leader with tremendous experience, plays important minutes and contributes to every part of our team game. We're very pleased for Alex and his family that he'll continue his career as a Vancouver Canuck."

The 34-year-old native of Ostersund, Sweden has spent his entire playing career with the Canucks since being drafted by the team in the third round of the 2004 NHL Draft (91st overall) out of Jamtland.

Limited to 56 games last season due to injury, Edler recorded 10 goals and 24 assists.

Last February, Benning called Edler the team's top blueliner and expressed hope that an extension would get done.

"He's our best defenceman,” Benning told TSN 1040 in Vancouver. “He's a leader in our room. He's a mentor to Petey (Elias Pettersson). He's an important guy for the development of our younger players. If we can get something figured out, I'd like to do it."

A veteran of 814 games, Edler has 94 goals and 368 points in his NHL career. Edler is seventh all-time in games played amongst Canucks and the leader among Vancouver defencemen.