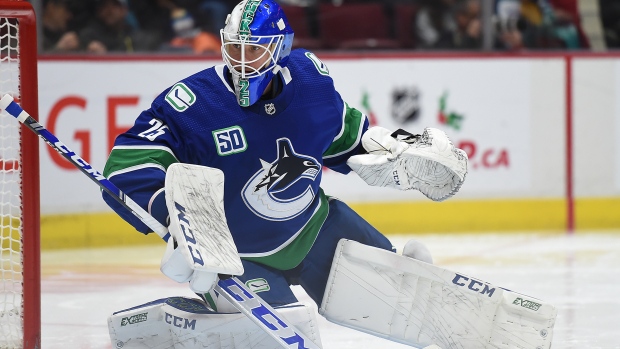 “I joked with Ian this morning — ‘You’re doing too good of a job with our goalies. You’re getting them to the point that we can’t afford to keep them anymore.’ He laughed," Benning told reporters on a video call.

Vancouver had just moved on from star netminder Jacob Markstrom, who struck it big in free agency, signing a six-year, US$36-million deal with the Calgary Flames.

“He’s excited to come to Vancouver, to join our organization, excited about our young players and our team. So we think it’s going to be a good fit," Benning said.

Holtby, 31, has spent his entire decade-long career with the Capitals after they drafted him in 2008, winning a Stanley Cup with the club in 2017-18 and being named the league's best netminder in 2016.

He now becomes a teammate of 24-year-old goaltender Thatcher Demko, who nearly led the Canucks to a comeback victory over the Vegas Golden Knights in the Western Conference semifinal after Markstrom was injured in Game 4.

The American made a name for himself during the Canucks' playoff run, stealing a pair of games against the Golden Knights to force a Game 7. Demko posted a 13-10-2 record with a .905 save percentage in regular-season play.

Working with a talented young goalie will be exciting, Holtby said.

"You want to be able to push each other and have success that way and I think that’s really exciting to me," he said. "Puts some young blood back into me, too. It’s always exciting to work with the young guys, they see things a different way too and you can learn a lot from them.”

Facing the potential of a condensed season, the Canucks will need two strong goaltenders so both Holtby and Demko will have ample chances to play, Benning added.

"That’s one thing I don’t worry about next year. I think we’re going to have real good goaltending," he said.

Each team can protect only one goalie in the Seattle expansion draft next year.

Heading into free agency, Holtby said he was looking for a city that was a good fit for his family and a team that had "an extremely good chance of winning."

The native of Lloydminster, Sask., posted a .916 save percentage with a 2.53 goals-against average and 282-122-46 record during his time in Washington.

He struggled last season, however, and his save percentage fell to .897 with a 3.11 GAA.

Holtby admits that the season was "a bit of a struggle at times" and "didn't go as planned."

During the COVID-19 hiatus, he worked with Washington goalie coach Scott Murray to break down his game and find ways to address what wasn't working.

“When things came back, I felt as good as I have in a long time," he said.

Coming into Vancouver, Holtby figures he'll have no problem gelling with his new teammates.

"I'm a guy who believes in hard work and competitiveness and a hard style of hockey. And you see a lot of the players on the Canucks that fit right into that mould," he said.

"From an outsider looking in, I think it’s going to be a great fit and I’m really excited to get after it.”

The Canucks also locked up Tyler Motte on Friday, signing the depth centre to a two-year deal worth $2.5 million.

There may be more signings to come, Benning said.

The Canucks are still in talks with veteran defenceman Chris Tanev about coming back, and spoke to some other teams about trades on Friday, the GM said.

“We’re keeping all of our options open," he said.