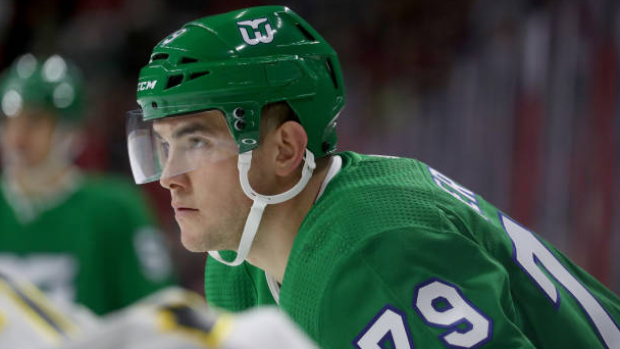 VANCOUVER — Last season forward Micheal Ferland and the Carolina Hurricanes shocked the NHL by not only sneaking into the playoffs, but storming through to the Eastern Conference final.

Now Ferland is looking to replicate that magic in Vancouver.

The 27-year-old unrestricted free agent signed a four-year, US$14-million deal with the Canucks on Wednesday.

With a crew of burgeoning stars like Elias Pettersson and Brock Boeser, the Canucks have what it takes to draw awe from around the league, Ferland said.

"You look at Vancouver and the players that they've got there and the guys that they're bringing in," he told reporters on a conference call. "I think that's the next step for Vancouver and I want to come over and see if I can help."

Originally selected 133rd overall by Calgary at the 2010 draft, the six-foot-one, 217-pound forward played four seasons for the Flames before he and teammate Dougie Hamilton were dealt to the Hurricanes in a blockbuster trade last year for Elias Lindholm and Noah Hanifin.

"Micheal is an energetic player that drives the play and can contribute in all three zones," Canucks general manager Jim Benning said in a statement. "He'll make our team harder to play against on a nightly basis and we're excited that he'll call Vancouver home."

A native of Swan River, Man., Ferland is known as a big body who will stand up for his teammates.

"I've got a style that I play. I think when I'm at my best is when I'm physical," he said. "So I'm out there being physical, I get my body into it and it seems like the rest of my game comes in also."

Ferland hopes to play a top-six role for the Canucks, and got the feeling that was a possibility after meeting with Benning and Canucks coach Travis Green.

"Meeting with Benning, he told me I'd have a lot of opportunity to play with Pettersson, Boeser, the skilled guys that they have," Ferland said. "They need a bigger guy on their line, you know, give them some space and be able to play with them.

"When I sat down and talked with my wife, I figured this would be the best opportunity for myself to grow and be able to play with those type of guys."

The Canucks have been busy in free agency this year. In addition to Ferland, the club has signed defenceman Tyler Myers and Jordie Benn.

Forward J.T. Miller was also added to the roster last month in a trade with the Tampa Bay Lightning for a first-round pick and third-string goalie Marek Mazanec.