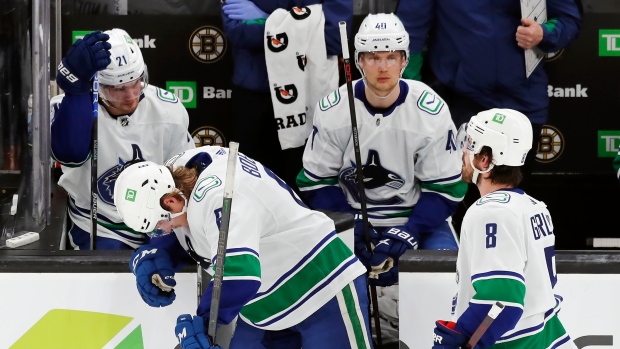 The Vancouver Canucks saw their losing streak extended to four on Sunday night with a 3-2 loss to the Boston Bruins.

The Canucks held a 2-1 lead entering the third period, but gave up two power-play goals in the final 12 minutes to the Bruins. Vancouver has just one win their past 10 games and have crashed to the bottom of the Pacific Division, one point below the expansion Seattle Kraken.

"It's a tough game to lose. It magnifies the way things are going," Green said. "There was a lot of good effort tonight. It was a heavy, hard-fought game. In the end, their top guys found a way to get it done. … We want to win badly. You can feel the disappointment at the end of the game."

“It's definitely tough,” winger Tanner Pearson added. “This one bites, going into the third period with the lead. That's one we need to have... We liked the effort, but you've got to win in this league to move on. We've got to dig a little deeper.”

The Canucks were outshot 42-38 in the loss and 18-11 in the decisive third period as goaltender Jaroslav Halak remained winless on the season. Halak, 36, dropped to 0-4-1 on the season with a .910 save percentage and a 2.85 goals-against average in the defeat. He is in his first season with the Canucks after joining the team on a one-year, $1.5 million contract in free agency.

After losing the first three games of their current five-game road trip, the Canucks will visit the Montreal Canadiens on Monday night.