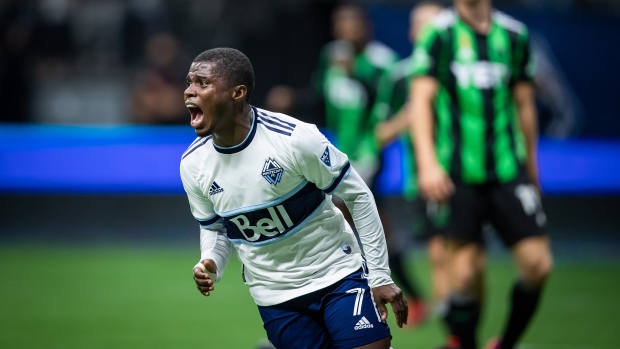 VANCOUVER — After flirting with a Major League Soccer playoff spot, the Vancouver Whitecaps are hoping for a more permanent relationship when they try to win a franchise record fifth consecutive game against the Portland Timbers on Friday night.

The Whitecaps were above the playoff line for about 25 minutes following their 4-1 win over Real Salt Lake on Aug. 29, then for 45 minutes after beating Austin FC 2-1 last week.

A win would vault them over the Timbers.

"If we win, we're in the playoffs," said interim head coach Vanni Santini. "It's a big motivation. The prize is there.

"We need to approach the game like it's already a playoff run. Every game counts like a final."

If the Whitecaps needed any extra incentive the game will count for the Cascadia Cup, a series between Vancouver, Portland and Seattle. It will be the first Cascadia game played at BC Place since May 10, 2019.

"There's a lot at stake, the playoffs, the rivalry, the Cascadia Cup," said Santini, who took over after Marc Dos Santos was fired Aug. 27.

"I don't have to bring the pressure up. We need to focus on the task and really do our job."

The last time the Whitecaps won four consecutive MLS games was between March 14 and April 4, 2015.

"We've had a good string of results and we'll be looking to carry that on as long as possible," said attacking midfielder Ryan Gauld, who has two goals and a pair of assists in the six games he's played since coming to Vancouver in a transfer from Portuguese side SC Farense at the end of July.

"We can't think too much about it. The confidence is high in the group but it's just another game. We need to go into it with the same attitude."

Centre back Florian Jungwirth said the Whitecaps can't have a repeat of last week when they trailed Austin FC 1-0 at halftime before scoring twice in the second half.

"We have to start with intensity," said Jungwirth. "No disrespect to Austin but Portland is another quality team. We can't afford for a first half like that because they are going to punish us."

The season has been two very different chapters for the Whitecaps. Due to COVID-19 restrictions they played their first eight "home games" in Sandy, Utah, before returning to Vancouver on Aug. 21.Vancouver started the year with seven losses in the first 12 games before things began to turn around in late June. Since then, the Whitecaps have lost just once in 13 games. Veteran Russell Teibert said the unbeaten streak has been fun.

"Things are always good when you are winning and we are on a bit of a roll right now," said the Niagara Falls, Ont., native who worked his way through the Whitecaps residency program.

"We're just taking it day by day, just coming into work and enjoying the atmosphere. There's a good vibe around here right now."

The Timbers will be playing their fifth straight road game. They come to Vancouver after 2-0 wins over Houston and Seattle following a loss to Austin FC and tying Sporting Kansas City.

Forward Yimmi Chara said it was important for the Timbers to get back on track.

"We had hard moments before those two victories so that gave us a big plus," said the designated player from Cali, Columbia. "There's still a lot of games left. We have to prepare ourselves in the best way and face the rest of the teams with the same mentality that we had in those last two victories."

ON DUTY: Three Whitecaps are returning from international duty with their national teams vying for spots in the 2022 World Cup. Goalkeeper Maxime Crepeau and striker Lucas Cavallini were part of the Canadian team that defeated El Salvador 3-0 Wednesday in Toronto while defender Javain Brown was part of the Jamaican squad that tied Costa Rica 1-1.

RIDING THE WAVE: The Whitecaps have collected 20 points from a 5-0-5 record in their last 10 games. Only New England Revolution with 25 points and Colorado Rapids with 21 points have earned more points over this period.

This report by The Canadian Press was first published Sept. 9, 2021.