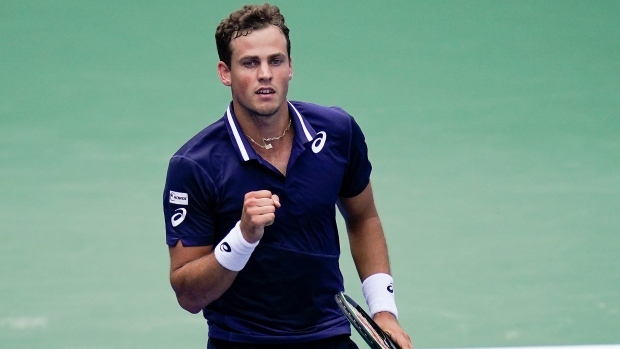 It was 30-year-old Pospisil's first win over 20-year-old Auger-Aliassime in four tries.

"Other than my first serve, I played pretty much the perfect match," Pospisil told TSN. "He was serving extremely well, but I felt like once the points started I was playing really solid from both sides and putting pressure on at the right times. I'm very pleased with my performance. Playing Felix is always super tough and today I was really feeling it."

Pospisil had eight aces to Auger-Aliassime's six, and while he was accurate on just 51 per cent of his first serves, he won 83 per cent of those points.

He broke Auger-Aliassime three times, including the two set-winning breaks, and saved two of the three break points he faced.

Auger-Aliassime was accurate on 74 per cent of his first serves, winning 70 per cent of those points. But he won just 42 per cent of second-serve points, compared to 53 per cent for Pospisil.

"I lost in the first round two weeks ago in Saint Petersburg," Pospisil said. "I played a really tough opponent [eventual champion Andrey Rubev], but I felt a little bit slower on the court than I usually do so I pulled out the week after and just did a bit of fitness and footwork to kind of sharpen up and it paid off. This week I'm feeling great on the court."

Pospisil, ranked 81st in the world, next faces fourth-seed Daniil Medvedev. Pospisil is 1-1 against the Russian, winning the last meeting in February at an indoor tournament at Rotterdam, Netherlands.

"He's so solid from the baseline," Pospisil noted. "I'll have to give him different looks and something that he's not used to and try to throw in some serve and volleys and just mix up the pace. I'm going to have to serve extremely well. I'm going to have to execute well and take my chances."

Also Wednesday, Novak Djokovic saved four set points in a 7-6 (11), 6-3 win over Borna Coric to reach the quarterfinals and move one step closer to sealing the year-end No. 1 ranking.

Djokovic can lock up the top position by winning the title on Sunday.

Otherwise Rafael Nadal could still mathematically overtake him, although the Spaniard would need to enter a tournament in Bulgaria next month in order to do so.

Djokovic will play either Hubert Hurkacz or Lorenzo Sonego in Friday’s quarterfinal.

Djokovic, who had not lost a set in three previous matches against Coric, saved two break points at 4-4 and one more in his next service game at 5-5.

Coric missed four set points in the 18-minute tiebreaker, including one on his own serve when he hit a forehand wide.

The Croatian saved two set points for Djokovic with aces but hit a backhand long on his opponent’s third chance.

“Borna is a great fighter. He has kind of similar style of tennis as I do. In the backhand corner very solid, trying to create points with the forehand,” Djokovic said in an on-court interview.

“He was serving very well, especially in the first set. It was very difficult for me to return his serve,” said Djokovic, who also held off a set point in his first-round match.

“The tiebreak again, like yesterday against (Filip) Krajinovic, decided the match, I guess,” he said.

Djokovic was in control of the second set after Coric double-faulted when facing a break point at 1-1.

Djokovic didn’t allow Coric another chance on his serve and closed out the win on his second match point.

“I am just really glad to stay focused and play my best at the right time,” Djokovic said.

Tsitsipas held serve throughout but still lost the opening set in a tiebreaker before improving to 3-2 against his German opponent.

Medvedev advanced to the second round with a 6-3, 6-1 win over Jason Lung, who replaced the injured Alex De Minaur.

This report by The Canadian Press was first published Oct. 28, 2020.