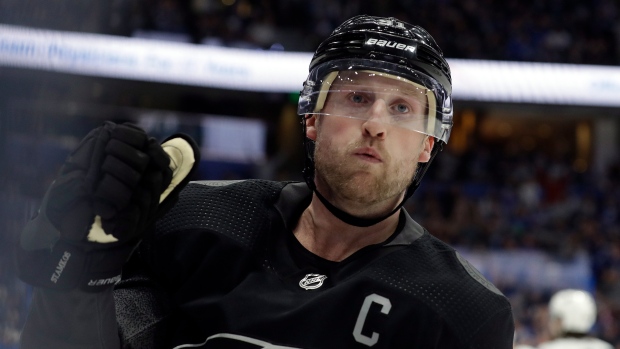 Andrei Vasilevskiy made 37 saves, Steven Stamkos had two power-play goals and an assist, and the Lightning beat the San Jose Sharks 7-1 on Saturday night.

“I think the whole team played great," Vasilevskiy said. "We gave up 30-something shots but not many scoring chances. I’ll take it all day. I was feeling it tonight."

The Lightning, who were swept in the first round of the playoffs last April by Columbus, had lost four of five (1-3-1) and entered just 13-10-3.

“We talked about keep pressing," Stamkos said. "We’ve had a tendency this year when we’ve had the lead to sit back a little too much. Our team is built to continue to press, use our speed and then the skill takes over."

Tampa Bay also got two goals from Tyler Johnson. Alex Killorn had a goal and three assits, and Victor Hedman and Carter Verhaeghe had the other goals.

Marc-Edouard Vlasic scored with 5:16 remaining for the Sharks, who had picked up a point in their previous five road games (4-0-1). Martin Jones was pulled early in the third after allowing four goals on 21 shots.

"It was a strange game," Sharks coach Peter DeBoer said. "At the end of 40 (minutes), I was pretty happy with how we were playing. I didn't think we deserved to be down 3-0 but that was the reality. The third period was just unacceptable. It was just poor effort. I think instead of sticking with it, I think we felt sorry for ourselves after that fourth goal."

Vasilevskiy made a nifty pad save on Kevin Labanc, who skated down the slot and took a pass from Joe Thornton 6 minutes into the second.

After tying Stan Mikita, Joe Mullen and Darryl Sittler for 49th place on the NHL power-play list on his first goal with 27 seconds to go in the second, Stamkos then tied Glenn Anderson for 48th with his 151st career man-advantage goal in the third.

The Lightning converted two of four chances with the man advantage.

Johnson opened the scoring 3:10 into the game. The Lightning didn't allow a goal during three short-handed situations in the opening 10 minutes of play.

San Jose is 0 for 23, including four opportunities Saturday, on the power play over its last 10 games.

"It's frustrating," DeBoer said. "I've been trying to be patient to get through it. It hasn't been good and it's getting to the point now where tonight a big difference in the game was special teams. We know the answer is there, we've had a good power play here, the personnel is there for it, we've got to execute."

NOTES: Stamkos stopped a six-game goal drought. ... Jones lost for just the third time in last 13 starts. ... Thornton has not scored a goal in his last 40 games. He is three away from becoming the 12th player to appear in 1,600 NHL games. ... Hedman has a goal in three straight games. ... Tampa Bay RW Nikita Kucherov had his seven-game point streak (four goals, 13 points) end.