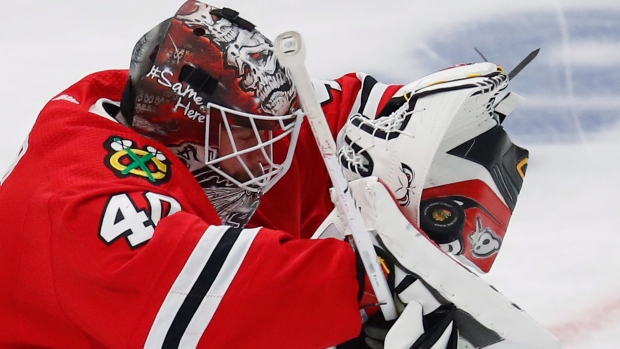 The Chicago Blackhawks have traded goaltender Robin Lehner to the Vegas Golden Knights in exchange for goaltender Malcolm Subban, prospect Slava Demin and the Golden Knights' second-round draft pick in the 2020 NHL Draft.

The Toronto Maple Leafs will send the Golden Knights forward Martins Dzierkals, receive a fifth-round pick in 2020 and retain a portion of Lehner's contract to complete the deal.

Vegas has acquired goalie Robin Lehner and forward Martins Dzierkals from the Chicago Blackhawks in exchange for goalie Malcolm Subban, defenseman Slava Demin and a 2020 2nd round pick#VegasBorn https://t.co/tJN1S4wBb2

The @MapleLeafs have acquired Vegas’ 2020 fifth-round pick in three-team trade with Golden Knights and Blackhawks.

The 28-year-old had a career year last season with the New York Islanders with a .930 save percentage and a 2.13 GAA. He was nominated for the Vezina Trophy and won the William M. Jennings Trophy and the Bill Masterton Memorial Trophy. He signed a one-year, $5 million contract with the Blackhawks on July 1, 2019.

Lehner was a second-round pick (46th overall) by the Ottawa Senators at the 2009 NHL Draft.