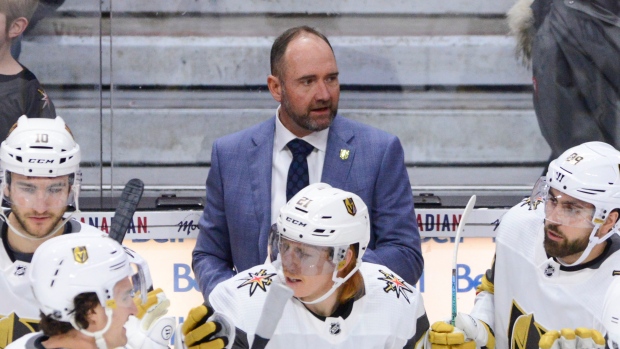 The entire coaching staff of the Vegas Golden Knights, including head coach Peter DeBoer, will be forced to isolate due to COVID-19 protocols after at least one member of the staff received a positive test, according to TSN Hockey Insider Darren Dreger.

Dreger adds that some members of the staff may only have to miss Tuesday's game against the St. Louis Blues due to protocols, but that has yet to be determined.

CoVid protocol for some of the Vegas coaching staff may involve only missing tonight’s game. Still to be determined. https://t.co/XiCjBEYhMd

Vegas general manager Kelly McCrimmon coached Tuesday with the team's AHL coaching staff. The Golden Knights lost to the Blues 5-4 in a shootout.

"Out of an abundance of caution, the coaching staff will be self-isolating for Tuesday night's game against the Blues due to COVID-19 protocols. Vegas Golden Knights general manager Kelly McCrimmon will be behind the bench Tuesday along with members of the Henderson Silver Knights coaching staff," the team said in a statement.

The 60-year-old McCrimmon coached the Brandon Wheat Kings of the Western Hockey League for 13 seasons before joining Vegas' front office in 2016.

Vegas is off to a strong start winning five of their first six games.