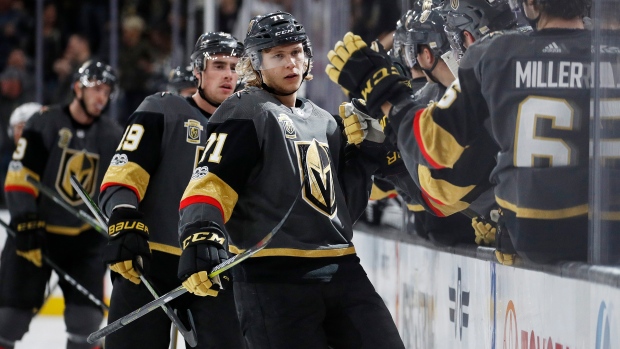 LAS VEGAS — The Vegas Golden Knights answered one off-season question when they signed William Karlsson to an eight-year contract.

Now they have to get under the salary cap before the start of next season.

Per Capfriendly.com, the Golden Knights' projected cap hit is currently $89,024,999. The NHL recently announced next year's limit will be $81.5 million, up $2 million from last season. That means the team needs to shave a little more than $7.5 million to clear the cap.

"It can get cumbersome for some teams in the middle of the summer, but typically it doesn't matter once you get to the season," Golden Knights president George McPhee said before the start of the team's development camp on Tuesday. "The plan was to build a team the best we could. Every once in a while, you get tight on the cap in this business. We're there now, we'll manage it and we will hopefully be in a much better place going forward with lots of cap space if we ever need it."

McPhee said he tendered qualifying offers to each of the team's restricted free agents, and now it's a wait-and-see approach. He added he isn't worried about the lingering David Clarkson contract, and "really isn't the issue that people think it is because you can just replace that salary at the right time."

The Golden Knights agreed to take on Clarkson's contract from Columbus, which parted with a first- and second-round pick in exchange, while negotiating for Vegas to pick Karlsson in the 2017 expansion draft. But Clarkson's NHL career is likely over due to a chronically injured back, and the Golden Knights will create some cap space when he goes on injured reserve.

Brandon Pirri, Ryan Carpenter, Pierre-Edouard Bellemare and Deryk Engelland are eligible for unrestricted free agency. Young forwards Pirri and Carpenter may no longer fit in Vegas' scheme with Alex Tuch signed through the 2025-26 season, and Erik Haula expected back after missing much of last season with a knee injury. Bellemare and Engelland have expressed interest in staying in Las Vegas, but could be headed elsewhere.

Then there is forward Cody Eakin and defenceman Colin Miller, who have garnered plenty of attention from other teams.

"We are going to have to make a few moves," McPhee said. "We've planned for that; we are going through that exercise right now. When we're done, we'll talk about it and explain it."