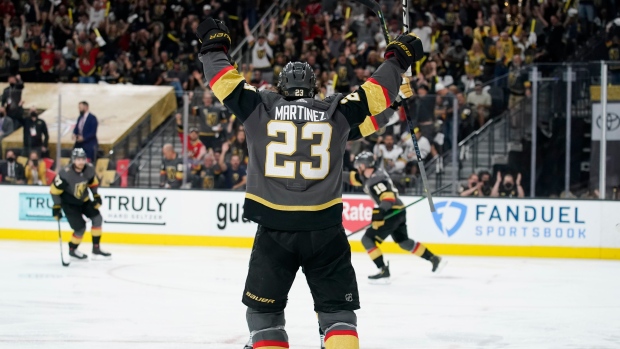 Just 20 solid minutes separate the Vegas Golden Knights and a Game 1 victory in the Stanley Cup semi-final as the Golden Knights got two goals in the second period and lead the Montreal Canadiens 3-1 heading to the third frame in the series-opener.

After leading 1-0 at the end of the first, Vegas made things 2-0 on a goal from Alec Martinez just under two minutes into the second period. Martinez beat Carey Price off a pretty feed from Shea Theodore -- who scored the first goal of Monday's game -- where he faked a slap shot from the slot and dished to Martinez, who wound up and fired into the open net.

The Habs struck back on a power-play goal from Cole Caufield to make it 2-1, but Mattias Janmark quickly restored Vegas' two-goal lead by beating Price for his fourth of the playoffs and pushing the Golden Knights' lead to 3-1.

Through two periods, Montreal has 17 shots to Vegas' 21.

Monday's game took place in front of a full capacity crowd at T-Mobile Arena, located on the southwest side of the Las Vegas strip.

Game 2 will go Wednesday night in Vegas before shifting back to Montreal for Game 3 on Friday.