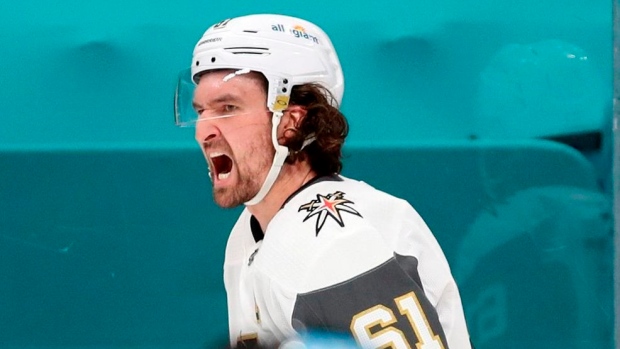 SAN JOSE, Calif. — Jonathan Marchessault scored the first of Vegas’ three power-play goals and the Golden Knights spoiled San Jose’s first home game in nearly a year with a 3-1 victory over the Sharks on Saturday.

Mark Stone and Chandler Stephenson also scored as Vegas took advantage of its first three opportunities with the man advantage to win for the fourth time in five games. Marc-Andre Fleury made 24 saves.

Tomas Hertl scored the lone goal for the Sharks, who were unable to get a boost with their return from a season-opening 12-game road trip. Martin Jones made 23 saves.

The Sharks played their first home game since March 8 last year after starting this season with the extended trip. San Jose was given the unbalanced schedule because of local restrictions that banned contact sports and practices, forcing the Sharks to hold training camp in Arizona.

By the time they finally got home, they were unable to get a win thanks to the efficient power play for the Golden Knights.

The game is the first back in San Jose for Vegas coach Peter DeBoer, who was fired by the Sharks in December 2019. DeBoer led the Sharks to their only Stanley Cup Final appearance in 2016 and the Western Conference Final in 2019 before getting fired early last season. He was hired last January by Vegas but hadn’t faced San Jose until Saturday.

DeBoer received some stick taps and applause from Sharks players when he was shown on the video board.

Vegas forward Ryan Reeves and Sharks forward Evander Kane have a long history of animosity that resurfaced in their first meeting of the season. After being called for coincidental minors in the first period, the two spent much of the penalty yelling back and forth at each other from the penalty box. That was made easier because the glass between the two boxes has been removed because of COVID-19 protocols.

Sharks D Radim Simek left in the second period after taking two hard hits from Marchessault. He went straight to the dressing room after the shift and didn’t return.