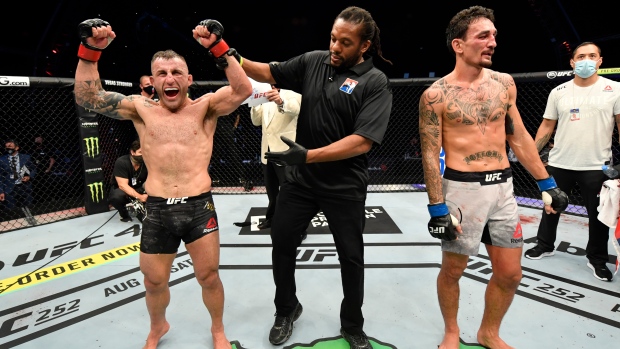 Every combat sports fan has been there. The horn sounds to end the final round of a fight and you either ask yourself, the people you’re with or search Twitter to find a consensus or form and state an opinion on who won.

Thanks to an innovation developed by three Canadian entrepreneurs, that information is now right at your fingertips.

Mandeep Singh Olma, Sanjay Thakur and David Chung created Verdict MMA, an app that allows users to weigh in round-by-round on fights, make picks on who they think is going to win and interact with other fight fans.

The company announced this week that they have closed a seed round after raising $500,000 from investors, including the Carlton James Group and MMA fighter Ben Askren, which the trio are planning to use to take the company to the next level.

“We’re always looking to increase engagement for the users and giving the users more data on particular fights,” Chung told TSN.ca. “As a sports fan, I love looking at data about a fighter and about an event. We want to be a source for our community to look at to be able to gather that data, more than just their picks and rounds.”

The idea for the app was born on a night that will be very familiar to Canadian MMA fans. In November of 2013, UFC Hall of Famer and Canadian legend Georges St-Pierre retained his welterweight belt, for what would turn out to be the final time, with a controversial split-decision victory over Johny Hendricks.

“All of us are GSP fans, it’s hard not to be a GSP fan, he’s such a respectful guy,” Olma told TSN.ca. “We are at my home watching the fight and we all wanted GSP to win the fight, but he was getting pieced up that night and before they read the decision I was like ‘wow, Georges actually lost this fight, Johny Hendricks won the fight, but then they announced GSP as the winner and there was a lot of confusion in the room. I remember me, Sanjay and David were looking at each other confused, because we wanted him to win, but did we think it was right? We didn’t.”

“The following Monday, I was listening to Ariel Helwani’s show ‘The MMA Hour’ and he had a caller from Vancouver who said ‘we were at a bar watching the GSP/Hendricks fight and when they announced Georges won the fight, we all went crazy because we thought Georges won’ and I just thought, wow, there’s people out there that actually thought Georges won the fight, where as everyone I was with thought Hendricks won the fight. Then I asked myself, how come I don’t know this and it’s because there is no direct link, I’m not following these people on social media, I just don’t know what they’re thinking. Then an idea just popped into my head.”

This was the fight that inspired the creation of Verdict. pic.twitter.com/POr49DLS92

That idea would result in the three friends creating the app that allows users from anywhere in the world to participate in real time round by round scoring during the live events, creating a global scorecard of crowd sourced opinions on each fight.

Those opinions are usually plentiful because judging in MMA is never far from the spotlight, as it is in any professional or amateur sport where a winner and loser is decided in that manner.

The difference in awarding the fight to the wrong person can be monumental to both a fighter’s future as well as their bottom line. While there is no way to know what the decision going the other way would have done to either fighter’s career, GSP would follow his 2013 win by relinquishing the title and eventually returning to win the middleweight belt, while Hendricks went 3-6, eventually retiring from MMA in 2018.

Creating a better way to view and execute judging is a lot of the driving force behind Verdict MMA.

“You realize how hard these guys work, doing this around the clock and it makes or breaks your career,” Thakur told TSN.ca. “GSP having that streak at the end of his career is amazing and puts him up for greatest of all time, it’s part of the discussion and having Johny Hendricks lose was unfortunate. Seeing these fighters and how much work they put in and then having something almost be a coin toss because the commission of that state has assigned particular people to judge it, it’s so extremely unfair.”

Verdict has a partnership with Professional Fighters League to integrate the results of the app’s real-time results into the broadcast, allowing for the crowd sourced judging voice to be heard along with both the broadcasters and ultimately the official decision.

“Leveraging wisdom of the crowd and getting everyone’s opinion in one spot is extremely useful for the community, for transparency, it’s something we refer to as ‘the scoreboard of MMA’.  You’re able to see where the fight is at, at any point in time, just like the score in a basketball game,” said Thakur. “So the community contributing to that adds a lot of transparency and that’s beneficial not only to the viewers, but to the fighters ultimately. How close was the fight? 10-9 doesn’t really tell you a lot, what tells you a lot is 9.7-9.4. Sometimes we’ve had stuff just on the neck of 9.5-9.5 and bringing that awareness to everybody, that’s invaluable.”

The wide disparities that can exist between the judges’ decision and the opinion of the worldwide MMA community was on full display during a recent bout involving another Canadian fighter, Rory MacDonald, who dropped a split decision to Gleison Tibau on a June 17 PFL card.

There's never been a point differential this big on Verdict where the opposite fighter has won.#2021PFL5 pic.twitter.com/YEPAMdlmDe

According to Verdict, this bout had the biggest point differential between who their global scoreboard thought won (MacDonald) and who was awarded the official decision (Tibau).

“When I heard the actual decision it was a shock, it looked clear as day,” said Olma. “That decision specifically there was a crazy outcry. Normally on decisions you see people defending both sides, but there was barely anyone defending Gleison Tibau. It’s unfortunate. If you’re a casual viewer that kinda delegitimizes the sport and that’s something you don’t want to see and that’s why people point to us and say Verdict said this, this is the real answer.”

That acceptance from the MMA community has been a both a huge motivator and boon to the Verdict team as they continue to grow and innovate their app.

“It’s more than a tagline, we actually do everything that we do for the fans, we’re an engagement focused platform, we listen to the fans, we have a Discord server, all three of us are in there constantly looking for feedback,” said Olma. “We want to build the best possible product for the fans. When we started this, it wasn’t a money thing, it was, how do we give fans the best possible experience. The fact that we’re here and we have their acceptance, it means everything because that’s ultimately who we do this for.”