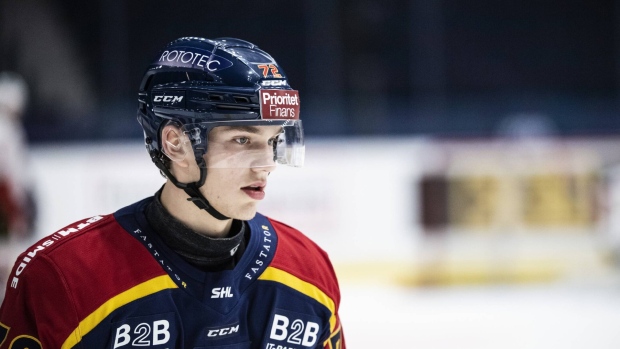 When TSN's mid-season draft rankings came out, Djurgarden forward William Eklund was in seventh spot. A confidant relayed that information to the 18-year-old, who responded by simply saying, "I'm going to go No. 1."

This interaction was reported by The Athletic in a recent profile on the promising Swede. TSN asked Eklund about that moment in an interview this week.

"It was more about my mentality," he said with a smile. "It's not that I want to be like a person who says that. It's just a mentality for me that's driven me since I was a little kid. You always want to be as good as you can so that's just my mentality."

It's that self-belief that helped the 5-foot-10, 176-pounder excel against men in the Swedish Hockey League last season. He produced 23 points in 40 games despite missing time with COVID-19 and following an emergency appendectomy.

Eklund was named the SHL's rookie of the year and received the E.J. McGuire Award from NHL Central Scouting, which is given annually to the prospect, who best exemplifies commitment to excellence through strength of character, competitiveness and athleticism.

And in TSN's final draft rankings unveiled by Bob McKenzie this week, Eklund moved up into a tie for fourth.

"I'm a very determined person," he said. "When I go into something I like to make it pretty well done and I'll do everything. And I also like to be positive, have a good vibe, and just try and enjoy every day and be kind to those around me."

During a conversation with TSN, Eklund described how he overcame adversity this year and admitted he's not sure if he'll be a centre or winger in the NHL. The following is an edited transcript of the interview.

How did you deal with the positive COVID test, which forced you to miss the World Juniors?

"That was hard for me mentally. That was my goal when I went into the season was to make that team so to not be able to try and make it was hard."

Did you have symptoms?

"I had some symptoms like a fever, but not that bad."

You underwent an emergency appendectomy in early January. What happened?

"We were going on a road trip. I was going on the bus and I had a fever and it was hurting in my stomach, but not the usual like if you had eaten something bad. It's something I had never felt before so I talked to the doctor. I had real high fever so we went straight to the hospital when we arrived. It was scary, because you didn't know exactly what it was, but I was in good hands there. I thank them for doing a fantastic job."

"It was like three weeks or something. I was just trying to get back as fast as I could. It was kind of easy for me, but also tough mentally, of course."

How did you become mentally strong?

"You have to overcome downfalls like missing the World Juniors and this appendix surgery to really work on your mental toughness. Those things are also important if you want to be successful. I've just tried to think in my own head about the positive things that can come out of it, not just the negative thing, so just trying to focus on the positive things. Yeah, that's my mentality."

How would you describe your style of game?

"A two-way forward, who likes to be an offensive threat with playmaking ability and also with my shot. Also, a hard-working guy who's working for the team on the forecheck and back-check."

I really like this clip of William Eklund (forward, #72 white).

He's the focal point of DIF's PP2. Makes the entry. Excellent deception down low, then scores from the near post (which is not a spot that talented teens typically play in pro leagues). pic.twitter.com/1mLdzj1swd

What NHL player is your role model?

"I like to watch Mathew Barzal a lot. He's able to create space for himself and his teammates with his skating ability and edge work and his quick turns in the corners. I love watching him."

Where did you improve the most this season?

"I improved my way of playing … I was more in front of the net in high-danger scoring areas."

Was that a mindset change or because you felt physically stronger?

"I would say both. Like, mental, but also, I gained some weight and was able to stay there for a long time."

What's it like playing on a line with Alexander Holtz?

"He's a tremendous player. It’s just fun being with your best friend. We have so much in common. It's been a friendship since we’ve been 12 years old. We enjoy playing with each other and I'm just trying to set him up. He's a tremendous shooter."

William Eklund gets down and gets some. It’s his 6th of the SHL season.

Alexander Holtz and him are having some fun. #2021NHLDraft

What position do you think you'll play in the NHL: centre or wing?

"It's hard to answer. I can do both. I can't really say I like one more. I played left wing a lot this year, but both feel pretty natural so I can’t really choose. I don't know what to say about that question."

"I like that you can be in the offensive zone and make turns and quick plays and be more on the offensive side than the centre. But, also, I like playing centre when you always come with speed in the middle and I also think it’s fun to have that defensive mentality."

What has allowed you to succeed against older competition despite not being the tallest player?

"I know I'm not going to be the biggest guy on the ice so I have to be even greater at the things I'm great at. So, just trying to use my skill-set and get to know what I'm good at and get even better at that."