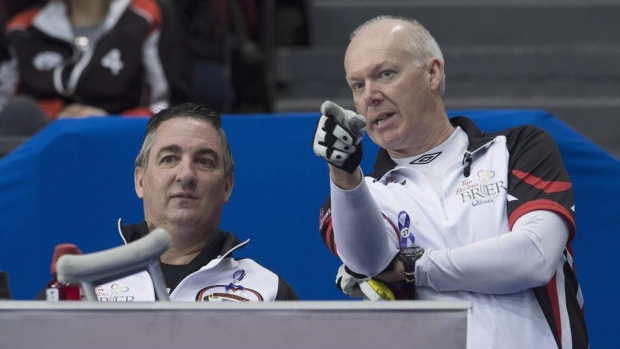 It will be like old times for Glenn Howard at the Tim Hortons Brier next month.

The veteran skip will have longtime teammate Wayne Middaugh in tow at the March 5-14 national men's curling championship in a bubble setting at Calgary's Markin MacPhail Centre.

"It's something that really excites me," Middaugh said. "I can't express how much."

Middaugh's role has yet to be clearly defined on Team Howard, which picked up the third and final wild-card spot in the expanded 18-team field.

He'll likely be listed as a fifth when the official team entry list is unveiled this month by Curling Canada, but Howard expects Middaugh will definitely see ice time. The team confirmed his addition in a Twitter post.

"Every time Wayne and I get together to curl competitively, good things happen," Howard said Wednesday.

Middaugh has handled coaching duties for world No. 1 Anna Hasselborg and her Swedish team over the last few years. He'll also be available to provide advice for a Howard side that includes third Scott Howard, second David Mathers and lead Tim March.

"His insight is invaluable," Howard said. "He's probably one of the best strategists ever in the game of curling. He knows the game so well."

A broken leg derailed Middaugh's competitive playing career in January 2016. Middaugh, who was Howard's vice at the time, was on crutches at the Brier that season to help the team from the coaching bench.

A Canadian Curling Hall of Famer, Middaugh has won Brier and world gold medals at three different positions. The 53-year-old from Victoria Harbour, Ont., won as a second for Russ Howard in 1993, as skip in 1998 and as Glenn's third in 2012.

He has represented Ontario at nine national playdowns, reaching the podium seven times. Middaugh and Howard have also played together in a local Tuesday night league with their wives for the last 25 years.

Howard is fully confident that Middaugh can quickly adjust for a return to the competitive scene.

"When he plays, he'll go out there and he won't have missed a step, I know that," Howard said. "That's his makeup and that's just the way he is. He's so competitive that it won't matter.

"(For) most people (a long break) would affect (them), but not Wayne Middaugh."

"It's as good a field as we've ever seen, as far as I'm concerned," Howard said.

The Feb. 19-28 Scotties Tournament of Hearts will kick off a run of six straight competitions in a spectator-free setting at Canada Olympic Park. The Brier will follow, ahead of the Canadian mixed doubles championship, world men's playdowns and two Grand Slam events.

Middaugh will head overseas shortly after the Brier to join Hasselborg's team at the March 19-28 world women's curling championship in Schaffhausen, Switzerland.

This report by The Canadian Press was first published Feb. 3, 2021.