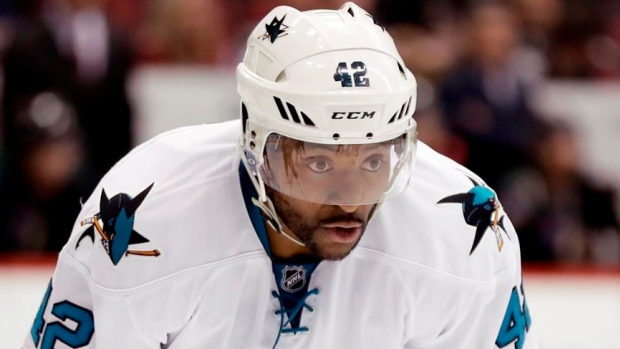 Joel Ward announced his retirement from professional hockey on Monday after 11 seasons in the National Hockey League.

Ward made the announcement in the Player's Tribune in a piece titled 726, the number of NHL games he appeared in.

Ward spent training camp ahead of the 2018-19 season on a professional tryout contract with the Montreal Canadiens, but had not appeared in a game since playing with the San Jose Sharks in 2017-18.

”I know I didn’t play the last two years, but I tried. I did. I wish I could have gone out in a bit of a different way,” Ward wrote Monday. ”But, you know, just thinking about it all — all 726 games — I realized something. Who am I to wish for any more time? I got what I wanted. I’m one of the lucky ones.”

Undrafted to begin his NHL career, Ward appeared in 726 games with the Minnesota Wild, Nashville Predators, Washington Capitals and Sharks, posting 133 goals and 304 points. The 39-year-old topped the 20-goal mark twice in his career, most recently with the Sharks in 2015-16.