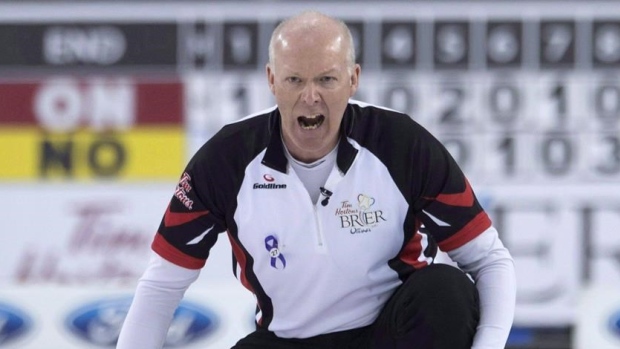 Brendan Bottcher's dramatic draw to win the Alberta curling championship gave him and his teammates reason to celebrate. The game-winning shot was cheered just as loudly by members of Team Glenn Howard.

Alberta was the last association to crown a champion, which guarantees a berth at the Feb. 28-March 8 Tim Hortons Brier in Kingston, Ont. Last Sunday's provincial final also locked in the teams for the play-in game at the national championship.

The two highest-ranked teams that don't win provincial or territorial titles get the chance to be Team Wild Card. Fourth-ranked Mike McEwen of Manitoba took the first spot and Howard, the Canadian No. 9 from Ontario, landed the other when Bottcher completed a 7-6 victory over Karsten Sturmay.

"It was literally a plethora of teams all had to go the right direction and some had to go the wrong direction," Howard said Tuesday from Tiny, Ont. "All the stars had to align."

McEwen, who dropped the Manitoba final to eighth-ranked Jason Gunnlaugson on Sunday, knew he had the ranking position for a play-in game spot well ahead of time.

That wasn't the case for Howard, who dropped the Ontario final to John Epping on Feb. 2. He needed several dominoes to fall his way to get the other berth.

The veteran skip entered last week with a slim lead on No. 10 Tanner Horgan and No. 12 Braden Calvert. However, both of those teams came up short in the Manitoba playdowns to miss a chance to leapfrog Howard in the standings.

The Alberta final was the last hurdle. A Sturmay win in the back-and-forth battle would have given the fifth-ranked Bottcher the wild-card spot.

Just as Bottcher settled into the hack for his last throw, Howard connected on a video call with his son, Scott (who also lives in Tiny), second David Mathers (an Ottawa resident) and lead Tim March (who lives in Toronto).

"It was a very fun, kind of stressful weekend watching it all unfold," Howard said. "Deep down you're thinking, 'What are the odds of all this happening?' But lo and behold it did, so we're in the mix."

Howard will have the home province crowd on his side at the Leon's Centre on Feb. 28. Attendance should be strong as admission to the wild-card game is free with donations to the Curling Canada Foundation accepted at the door.

"It's a really different feeling," said Howard, who'll be making his wild-card game debut. "I'm old school. In my case, we lost the provincial final. When you come second, you don't go on. There's usually no second chance (but) in this case there is.

"It's a little bit of mixed emotions but obviously it's the way the system is. We're going to try to take advantage and try to sneak in as a wild-card team."

McEwen's side, meanwhile, gave up a deuce in the ninth end of a 7-4 loss to Gunnlaugson.

"It's excitement and maybe a good chance at redemption after maybe not putting together our best performance in the provincial final," said Team McEwen lead Colin Hodgson.

Howard or McEwen will become the third seed in the 16-team field. Team Wild Card will play the preliminary round out of Pool B.

"Recently I think both teams have been playing significantly better after figuring some stuff out," Hodgson said from Red Lake, Ont. "Every game we've had against them recently has been just battles back and forth constantly."

The top four teams from each pool after the preliminary round-robin will advance to a championship pool that will determine the four playoff teams.

The semifinal and final are set for March 8.

The Canadian Curling Hall of Fame is set to welcome two new inductees this season.

The Class of 2020 includes Julie Skinner of Victoria and Wayne Middaugh of Victoria Harbour, Ont., Curling Canada said in a release.

"Both Julie and Wayne have worn the Maple Leaf with class and distinction and are worthy additions to the Canadian Curling Hall of Fame," said Curling Canada board of governors chair John Shea.