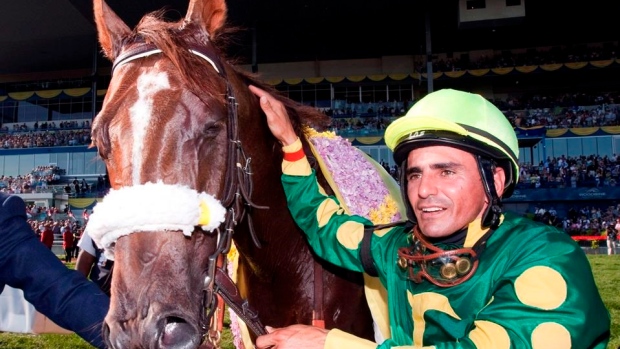 It's where he won over 2,200 career races — including two Queen's Plates — and seven times earned recognition as Canada's top jockey. But it was also where Da Silva could temporarily bury his personal troubles.

During a race, Da Silva was a fiercely competitive and driven jockey yet afterwards always had a smile and appeared upbeat and jovial. But in his candid autobiography, "Riding for Freedom," Da Silva makes shocking revelations about his sex and gambling addictions and the psychological damage caused by a verbally abusive father.

"Man, I cried for three months (writing the book), even more, it was not easy," Da Silva said in a telephone interview. "Some days, I didn't even go outside the house, it was just dark for me.

"But it was very therapeutic because I realized even more how much damage I'd suffered. I'm not saying this to be a victim . . . my father probably has a health issue with his own mind and I don't want to be a victim of him. I believe what happened can make me stronger and who I am but much damage was done."

However, all was good when Da Silva arrived at the track.

"It's like I took a painkiller," he said. "I'll be honest, there were two Ricos inside of me.

"I don't know if it was because people really loved me (at the track) and gave me a lot of support that made me feel welcomed. The racetrack was always a good place but I think Woodbine was, by far, the happiest place I ever felt in my life. Even now when I drive there, I still feel good inside."

Da Silva was born in Brazil and grew up on a dairy farm. In the book, Da Silva details how his father constantly tormented him about his size and challenged him about his sexuality growing up.

"I think it's the guilt he feels himself that he projected on us, not only me but my mom, sister and brother," Da Silva said. "If I didn't protect myself, and I've said this to my brother, then we would project it on our kids.

"When I went to the psychologist it was very smart of him to tell me, 'Eurico, you have to break this cycle, not just for yourself but for your kids. If you don't deal with this, you're going to project the same things on them.'"

But it wasn't until recently that Da Silva learned his father was also abusive towards his brother.

"I had no idea," Da Silva said. "I thought he loved my brother like crazy . . . when I opened up to my brother two years ago, guess what?

"It was the same thing and we didn't know."

"Early in my life I thought there was something wrong with me, especially with my sexuality, because of how I was treated," Da Silva said. "I thought I didn't deserve to be here.

"I persevered, I guess, you feel like tomorrow will always be better. I thought because I had bad asthma one day I'd get lucky and asthma would take care of it . . . but it didn't."

Despite his despair, Da Silva also realized early he wanted to ride horses.

"When I was around five years old," he said. "When I saw jocks racing the horses, I had this warm feeling in my heart like, 'This is what I want to do.'

Da Silva spent four years riding in Macau, where he met his first wife, Claudia, before arriving at Woodbine in 2004. Six years later, he was shaking Queen Elizabeth II's hand after winning a second straight Queen's Plate en route to being named Canada's top jockey for the first time.

"People like us with addictions, we sabotage our mind," he said. "This was (the case) with me.

After initially working with a sports psychologist, Da Silva began seeing a sex-addiction therapist, which he said has helped him tremendously. His first marriage also ended but Da Silva did find love again, marrying his second wife, Orlaith, in 2016.

He's come to terms with his painful childhood and understands the importance of that for his wife and three children — an eight-year-old son and two daughters aged four and two. And although he retired at the top of his game in 2019 — he guided 44-1 longshot El Tormenta to victory $1-million Ricoh Woodbine Mile — Da Silva has no regrets.

"When I'm with my kids, and I say this from the bottom of my heart, I feel like I am getting a chance to live my childhood again," he said. "It's a lot of fun to be with them, they make me feel like a kid again.

"And I have a great marriage. It's not perfect because it's not supposed to be and if I tell you that I'm lying. I'm learning with her and she's learning with me but I can say I'm very fulfilled."

Da Silva said while his father is still alive, the two don't talk.

"My intention for doing the book was for people to really understand that a lot to do with your life is how you grew up," he said. "The message I want to give to people is if they're doing something they think is wrong, it's not because they're bad people it's how they were programmed.

"I want to give them hope that they can go for help and overcome this because if I can overcome myself, I believe anyone can."

This report by The Canadian Press was first published Feb. 16, 2021.