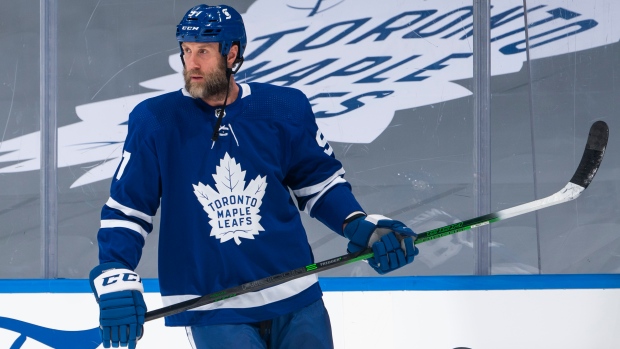 TORONTO — Joe Thornton was just five games into his Maple Leafs’ career when a collision with Edmonton’s Josh Archibald caused a fractured rib that’s kept the veteran sidelined for the last month. It was hardly the start Thornton was looking for in Toronto, and coming off his first full practice since the injury on Sunday, he’s more ready than ever to get back to work.

"It was unfortunate, but I feel really good now and I can't wait to play [Monday versus Ottawa],” Thornton told reporters on a Zoom call Sunday. “I got the proper pads in and I've been taking some light hits and some big hits and medium hits, so right now I feel really good. I've got no restrictions. The hardest part is over, the rehab is pretty much over, and now I can just go out and focus on playing.”

Thornton’s missed 10 games for the Leafs since exiting in the third period of that Jan. 20 tilt against Edmonton. At that point the forward was just beginning to find a rhythm with his new team, and having pocketed one goal and two points in his first five outings.

Despite the short time frame, Thornton had also begun developing strong chemistry with linemates Auston Matthews and Mitch Marner, and was a fixture on the team’s top power play. Thornton was back on his previous perch on the Leafs’ top line during Sunday’s practice, and was looking forward to adding onto what his two young teammates have recently accomplished. In the 10 games Thornton’s been absent, Matthews tallied nine goals and three assists while Marner had four goals and 12 assists.

"[They're] two very talented players that are playing really well right now so just hoping to keep the good play going,” Thornton said. “The way they see the ice is very rare and I think they play off each other very nicely. Mitch has added a new element to his game with his shooting so I think they're both dangerous threats when they have the puck, and they just see each other very nicely.”

Based on what head coach Sheldon Keefe saw from that trio early prior to Thornton’s injury, he had no hesitation about reuniting them, and believes there’s plenty more potential they can tap into.

"I just thought they had good chemistry,” Keefe explained. “I thought a lot of the things that I was hoping would happen with the line were happening and that Joe with his skill set and the way that he moves the puck complemented those guys very well, and also that Joe would be a presence down below the hashmarks in the offensive zone, and he did that very well for them.”

In fact, Keefe admitted to being somewhat surprised even at how well the line operated. Per Natural Stat Trick, over that five-game sample as a unit they registered nearly 74 per cent possession and 34 scoring chances for, compared to just nine against.

"Probably the area that I had maybe underestimated a little bit is Joe's ability to win the puck back,” Keefe said. “He was tracking guys from behind and with is his reach got a stick on pucks and created so many loose pucks and turnovers and opportunities for Mitch and Auston going the other way. Those kinds of things really stood out to me and I think the line had enough success and did enough good things in that short window that I didn't want an unfortunate injury to Joe to disrupt what was our plan to go with to start the season."

To make room for Thornton’s return, Keefe had to do some shuffling elsewhere.

Ironically, the Leafs just posted on Saturday their first regulation loss since the game Thornton was injured, a 2-1 defeat against Montreal. That outcome alone was likely to spark some further lineup changes that Keefe ultimately tinkered with during Sunday’s practice: Nic Petan and Travis Boyd were both moved down to the taxi squad, while Scott Sabourin was promoted and is now poised to make his Leafs’ debut Monday on the fourth line with newly-demoted Jimmy Vesey and stalwart Jason Spezza. Toronto just signed Sabourin to a one-year, two-way $700,000 contract last week.

Meanwhile, with Thornton occupying the wing alongside Matthews and Marner again, Zach Hyman slid down to skate with John Tavares and William Nylander, while Ilya Mikheyev and Pierre Engvall flank Alex Kerfoot on the third unit.

It made for a lot of moving parts, but Keefe claimed not to be committed to anything before Toronto faces Ottawa for the first of three meetings against one another in four nights.

"We haven’t made any final determinations,” Keefe insisted. “I wouldn't assume anything based on today's practice.”

What was clear from the session though was how much the Leafs enjoy having Thornton in their midst again on the ice.

"I think it'll be a big boost [having him back], especially with just the vibe in the room, the team morale,” said Morgan Rielly. “When he's around, everyone is a bit more upbeat, a bit more happy if you will and I think that he just brings a lot. He's a great player obviously, his career speaks for itself, but I think he's got great leadership [skills] and we're looking forward to having him back.”

Thornton has been pleased with what the Leafs have shown in these weeks without him though, from weathering another key injury to Wayne Simmonds on Feb. 6 to finding ways to win tight games. Toronto’s already sitting atop the North Division at 11-3-1 on the season, and Thornton only sees them going higher.

"I like a lot of things,” he said. “I think the powerplay has been great [at 34.1 per cent], five-on-five looks strong. I think Frederik Andersen's been unbelievable. I really didn't know too much about Freddy coming in here but seeing him play [so far], this guy's a stud. So things are going real good right now.”