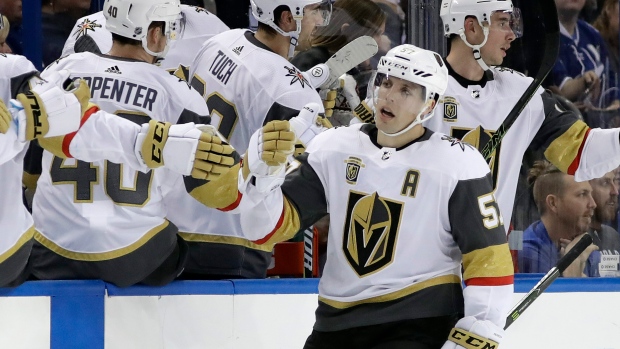 TAMPA, Fla. — Marc-Andre Fleury and Vegas Golden Knights went on the road and posted a big win against another Stanley Cup contender.

This expansion team is showing no signs of slowing down.

Fleury made 28 saves, David Perron had a goal and an assist, and the Golden Knights beat the Tampa Bay Lightning 4-1 Thursday night in a matchup of conference leaders.

Neal, Nate Schmidt and William Karlsson also scored for the Golden Knights, who swept the two-game season series with the NHL-leading Lightning.

"They are a great challenge for us, the best team in the league," Fleury said. "We had a great game. The guys held the puck, took their timing away."

The Golden Knights needed just 44 games to become the fifth team in NHL history to reach 30 wins during its inaugural season. Anaheim and Florida share the expansion record with 33 wins, both coming in 84 games in the 1993-94 season.

Tampa Bay, coming off its bye week, got a goal from Ondrej Palat, and Andrei Vasilevskiy stopped 26 shots. Vasilevskiy, an All-Star this season, has allowed 19 goals over his last four games.

"As a leader, I have to be a lot better and set an example," said Lightning captain Steven Stamkos, who was minus-3. "Our line didn't do that and I take responsibility for that."

Fleury made a number of impressive stops, including a left-circle shot by Stamkos and in-close chance from Nikita Kucherov during the second period. The goalie, who spent most of his career with Pittsburgh, is 19-11-4 against the Lightning.

Neal opened the scoring with a nifty deflection 56 seconds into the first, and Schmidt made it 2-0 with 3:57 left in the period. Deryk Engelland got his 100th NHL assist on Neal's goal.

Vegas is 19-1-0 when scoring first, with the lone loss coming Oct. 30 to the New York Islanders.

After Palat got a power-play goal midway through the second, Perron put the Golden Knights up 3-1 late in the period.

Karlsson got his 24th goal 18 seconds into the third.

"We didn't put up a fight and that's on us," Tampa Bay defenceman Anton Stralman said.

NOTES: Neal has 11 goals and 19 points in 18 games against Tampa Bay. ... Palat stopped a 21-game goal drought. ... Lightning D Dan Girardi, hit on the back of the neck by a slap shot Jan. 7 against Detroit, was back in the lineup. ... Golden Knights C Cody Eakin played after sitting out one game with an undisclosed injury.