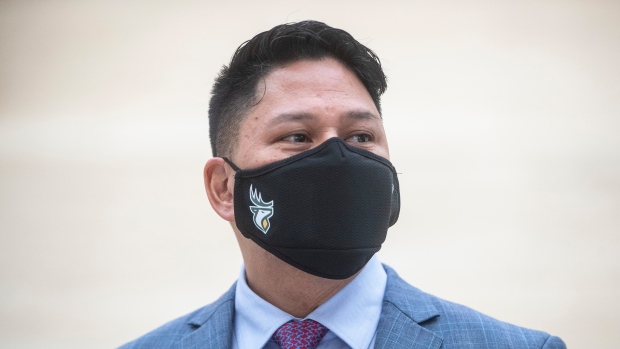 Cui, who was born and raised in Edmonton, co-founded the Singapore-based One Championship mixed martial arts promotion, which made its debut in 2011 and now broadcasts to over 150 countries and is currently valued at over US$1 billion.

He previously worked as a senior executive at ESPN Star Sports and the PGA Tour.

“As much success One Championship has had in Asia, and the experience I gained during my time there, the opportunity to return home and lead this cherished organization that I grew up watching from the Knothole Gang is truly a dream come true,” Cui said in an Elks press release.

“Edmonton has always been home to me. Being away gave me even more appreciation of what a special city this is and what a privilege it is to represent this organization.”

The 50-year-old Cui takes over from Chris Presson, who was fired in November along with general manager Brock Sunderland and head coach Jaime Elizondo after a disastrous 2021 season.

The storied CFL franchise was tied for the league's worst record at 3-11, and lost all seven of its home games at Commonwealth Stadium.

Cui's family left Edmonton for West Africa when he was five. He came back to the Alberta capital when he was 13.

Cui graduated from the University of Alberta and, after postgraduate studies in Vancouver, worked in marketing at the 1998 Commonwealth Games in Malaysia and 2000 Olympics in Sydney.

He spent five years at the RCGA and also worked on the world track and field championships in Edmonton.

“We’re thrilled Victor has agreed to bring his broad local and international sports leadership experience and bountiful energy to lead this community’s football club,” Ian Murray, chair of the Elks’ board of directors, said in a statement.

“We are confident Victor’s tenacity, creativity and proven ability to inspire people to quickly deliver big results will play a major role in our promise to re-energize the organization and our fans.”

This report by The Canadian Press was first published Jan. 25, 2022.