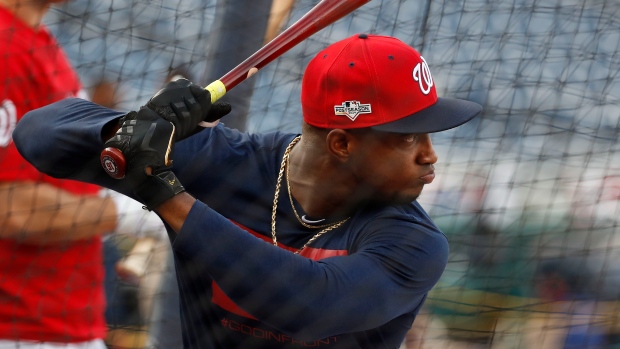 WASHINGTON — Victor Robles made an immediate impact in his return to the Washington Nationals' lineup.

After missing five games with a hamstring injury, Robles homered, singled and scored twice over the first six innings of the Nationals' 8-1 victory in Game 3 of the NL Championship Series against St. Louis. The 22-year-old made manager Dave Martinez look like a genius for plugging him right back into centre field despite Michael A. Taylor's homer in Game 2.

It wasn't a debate for Martinez, who Sunday said Robles would "get a chance to play" over Taylor when 100% healthy. Robles took swings in the batting cage and made it an easy decision.

"He ran the bases (Sunday) and ran them at full tilt," Martinez said before the game. "He looked really good."

His swings against Cardinals pitching looked even better. Robles, batting eighth, lined a base hit up the middle off starter Jack Flaherty in the third inning and crushed reliever John Brebbia's 2-1 fastball over the right-centre fence in the sixth to help the Nationals take a 3-0 lead in the best-of-seven series. They can complete a four-game sweep at home Tuesday night and earn the franchise's first trip to the World Series.

Robles hit .255 with 17 home runs, 65 RBIs and 28 stolen bases this year during his first full season in the majors. He had last played in Game 2 of the NLDS against the Los Angeles Dodgers.

The Cardinals made only one lineup change after putting up just one run on four hits in the first two games. José Martínez started in right field, with Tommy Edman shifting to third base in place of Matt Carpenter.

"José has just had good at-bats, putting good swings on the baseball," manager Mike Shildt said. "Just looking to mix it up a bit, nothing too crazy, obviously."

Unlike Martinez's decision to insert Robles, Shildt's lineup tweak did not pay dividends. St. Louis scored one unearned run on seven hits and is staring down elimination in Game 4 on Tuesday night.