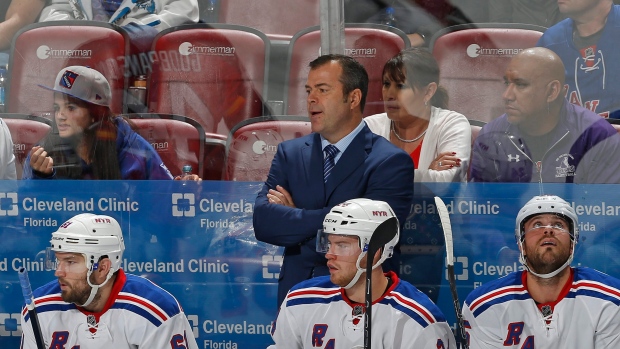 Alain Vigneault has fired back at Claude Julien after the Boston Bruins coach accused New York Rangers netminder Henrik Lundqvist of embellishing during the Bruins' 4-3 win over the Rangers on Friday afternoon.

During the third period of the game, Lundqvist took a knee from Brad Marchand with Julien asserting that the Swede had done "some acting" on the play.

“The referees are there to protect goaltenders, and they should," Julien said. "But goaltenders shouldn’t take advantage of referees. You may think it’s a good play for his team to get a power play, but we’re all trying to get that out of our game. If my guys do that, I’m going to address it. I’m not hypocritical about that. We’re trying to improve the game here.”

Vingneault spoke ahead of the Rangers' afternoon encounter with the Philadelphia Flyers at Madison Square Garden and responded.

“I mean it’s a little disappointing," Vigneault told The New York Daily News about the comment. "Obviously everybody saw the knee to the head. The comments on Hank were very inappropriate. The way Hank conducts himself, on the ice, away from the rink, off the ice, the example that he sets. Who would you rather have as a son, Henrik (Lundqvist) or Brad Marchand? For him to say things like that about Hank, totally wrong, and probably Claude is getting a little older and needs to check his eyesight.”

The two teams next meet on January 11 at MSG.