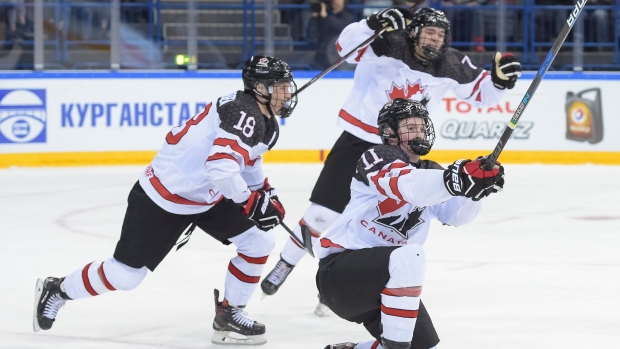 TSN reporter Mark Masters checks in daily with news and notes on Team Canada, who practiced on Tuesday in Wurtele Arena at CFB Esquimalt.

Team Canada hoped that Gabriel Vilardi could play a big role at the World Juniors even though the Kingston right winger had suited up in just four games this season. And things looked promising on Sunday when Vilardi, who sat out the selection camp scrimmages, skated on a line with Jaret Anderson-Dolan and Nick Suzuki at practice. But Vilardi missed Monday's skate to get evaluated off-site and on Tuesday Hockey Canada announced that the Los Angeles Kings first-round pick in 2017 will be unavailable for the tournament.

Vilardi has been plagued by a nagging back injury, which has sidelined him for most of the last two seasons. He had recently returned to game action in an AHL conditioning stint with the Ontario Reign when the issue flared up again.

"We were working hard with Gabe, getting medical assessments, seeing where he was going to be at and unfortunately the timelines don't match for the World Juniors," said Shawn Bullock, Hockey Canada's director of men's national teams. "Coming in, we knew what a quality player and person Gabe was and we were optimistic we'd have him back in time, but the timelines didn't work out."

Due to the uncertainty surrounding Vilardi, Team Canada kept an extra forward beyond the final selection camp scrimmage on Friday. Rimouski's Alexis Lafrenière was told he would be released if everyone was healthy enough to play. Now the 17-year-old is poised to become the ninth-youngest player to ever suit up for Canada at the World Juniors.

"Laffy's been with us the whole time for a reason," Bullock said. "We knew this situation could arise. We made sure we had Laffy here and being a part of all the team activities and on the ice with the guys and being ready to jump in if called upon."

Lafrenière is set to become the first 17-year-old to play for Canada since Connor McDavid. The only players to make our national junior team at a younger age were: Jay Bouwmeester, Sidney Crosby, Jason Spezza, Eric Lindros, McDavid, Wayne Gretzky, Paul Kariya and Mike Ricci.

Anderson-Dolan was also an injury concern when Canada's camp opened, but the Kings prospect has practiced the last three days with contact and looks likely to play on Wednesday. It would be his first game since breaking his wrist in a WHL game with Spokane on Oct. 27.

Meanwhile, there's a new health issue that has cropped up in recent days for Team Canada. Prince Albert's Brett Leason blocked a shot off his hand in the third period of Friday's final selection camp scrimmage against the U Sports all-stars and has been unable to go through a full practice since. However, the winger did skate on his own before Tuesday's workout. The 19-year-old, who led the WHL in scoring when he left for Canada's camp, is considered day-to-day.

Leason is unlikely to play in Wednesday's pre-tournament game against Switzerland.

Canucks prospect Michael DiPietro will start Wednesday while Maple Leafs prospect Ian Scott will get the call on Friday against Slovakia.

"Definitely excited, but not overthinking it," said DiPietro. "Want to put a good foot forward for the coach, but it's about applying the systems we've worked on the last three days. And, for myself, it's about keeping things simple, being on pucks and taking things one puck at a time. It's an exciting time, but also just another step in the process."

Head coach Tim Hunter says the staff will re-evaluate the goalies after the second game before deciding how to approach the final pre-tournament test on Sunday against Finland.

Last season, Evan Bouchard became the first defenceman to ever lead the storied London Knights franchise in scoring. He lit up the OHL to the tune of 25 goals and 87 points before getting picked 10th overall by the Oilers in June’s NHL draft. Needless to say, his shot is a big weapon. In fact, it’s so good it already has its own nickname.

When Bouchard scored his first NHL goal with Edmonton in October, fellow Oilers prospect Ryan McLeod sent a congratulatory tweet with the hashtag, #BouchBomb and some fans followed suit in various social media posts. So, where’d the name originate?

“I don’t know,” Bouchard said with a sheepish smile. "I guess it started when I was in Edmonton and (McLeod’s) never going to let me hear the end of it."

Even his new World Junior teammates have joined in on the fun.

"Some of the guys were getting on me a little bit," Bouchard acknowledged.

Hockey players tend to be pretty modest and Bouchard didn’t seem sure what to make of the moniker.

"A lot of people say it," noted Sault Ste. Marie Greyhounds forward Morgan Frost. "I don’t know if he likes it or not. If I had a nickname for my shot that was 'The Bomb' I’d probably be pretty happy."

So, what exactly makes Bouchard's shot so worthy of such a description?

"It's pretty hard," he says. "That’s definitely a given. He gets it through like all the time, it’s pretty crazy. It’s definitely a weapon and a lot of times penalty killers are probably not going to want to block that so it’s nice to have the #BouchBomb on our side for sure."

Nick Suzuki has felt the pain of a Bouchard shot and lived to talk about it.

"I've blocked a couple," said the Owen Sound Attack centre. "Luckily I got them right in the shin pad, but they still stung."

Suzuki’s teammate Kevin Hancock wasn’t so lucky as a #BouchBomb broke his hand in a game on Nov. 24, 2017.

What makes Bouchard’s shot so effective is even if you want to block it, it’s not easy to get in the way.

"When I’m on the PK against him in junior, it’s almost like you’re just waiting for him to shoot and he waits an extra second and gets it through you," Suzuki said. "He’s got a ton of patience back there. He seems kind of casual back there, but he always knows what he’s going to do."

That's one of the reasons why Hunter has Bouchard quarterbacking Canada's top power play unit.

"He can bring a guy to him and then make a play and a real good play at that," Hunter noted. "And not a lot of guys have that patience threshold. They like to get somebody five or six feet away from them and then they’re making a play. He can drag a guy right to two or three feet from him and make a play. And he’s got a real heavy shot. Heavy wrist shot, heavy snap shot and a real heavy slap shot as well.”

"It's just a threat every time from the top of the point," Suzuki marvelled. "Somehow he can hammer it and still have deadly accuracy."

Part of it, Bouchard theorizes, has to do with his upbringing as the second youngest of four boys in his family.

“I had three brothers so I guess they were always the hyper ones and I was the calm one so that might be a part to it," he said.

Of course, that may be simplifying matters a bit. Bouchard has put in the work and is now reaping the benefits.

“I think a big part of it is knowing your ability with the puck and, for me, being poised is a stronger part of my game so I just came to really trust I can do it," Bouchard said.

In the second half of last season, Bouchard took his game to another level after the reloading Knights traded away some key players and made the defenceman their captain.

"The #BouchBomb has probably been developing over the last few years," said Suzuki. "Played against him and with him so I get to see it a lot."

"Growing up, I practiced it a lot," Bouchard said, "and I think getting out early (in practice), especially back in London, to make sure it stays above par is important."

As for the nickname.

"I’m not sure he likes it that much," Suzuki says with a grin, "but hopefully it can translate to something bigger."

Indeed, if the #BouchBomb is trending this Christmastime that can only mean good things for Canada.

Last year at this time, Suzuki was on his way home from Team Canada’s selection camp after being one of the final cuts.

"Leaving last year and not being on the team was really tough," the London, Ont. native admits. "I took it as motivation and I really wanted to get back to this point and to now be on the team is really special. It feels really good."

Getting cut is tough, but getting traded isn’t easy either, especially when the deal comes on the eve of training camp. Suzuki, who has 43 points in 28 games this season, credits the Canadiens for helping get him on track quickly after he was shipped north from Vegas in that blockbuster deal for Max Pacioretty.

"I've really improved on my skating and trying to play with that fast pace," Suzuki said. "That’s something Montreal sent me back with, ‘Keep playing with the high pace in junior,’ and I think that’s translated well in the selection camp and these practices. I feel more prepared this year and I’m ready for the tournament."

Suzuki didn’t just make Team Canada this year, he’s expected to play a key role as one of the top two centres.

"My expectation for myself is to try and have a big tournament for this team," he said. "I have a lot of versatility and the coaching staff can use me in a lot of situations."