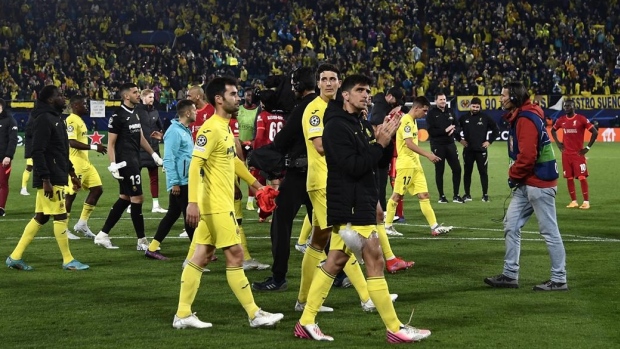 MADRID (AP) — Long after the match ended, Villarreal fans stayed on their feet cheering at the La Cerámica Stadium.

The result was not what they had hoped, but the feeling was of a job well done.

There was more pride than sadness for the modest Spanish club after it came up just short of pulling off yet another upset against a European powerhouse in the Champions League.

“We were close to excellence,” Villarreal coach Unai Emery said after the team’s 3-2 loss to Liverpool in the second leg of the Champions League semifinals on Tuesday. “We know that the fans have enjoyed it. It’s a good project that allows us to experience moments like these.”

Villarreal scored twice before halftime to erase a 2-0 loss from the first match in England, but it couldn't keep up with the six-time European champions in the second half.

“We needed something extra,” Emery said. “We ran out of strength.”

Villarreal certainly gave it a good run, after having already eliminated Juventus in the round of 16 and Bayern Munich in the quarterfinals.

Not bad for a team based in a city of 50,000 people in southern Spain and with one of the smallest budgets among all Champions League teams.

“Everyone needs to be very proud of this club,” Villarreal striker Gerard Moreno said. “We go out with our heads held high.”

Liverpool coach Jürgen Klopp had nothing but good words about what Villarreal achieved.

“Respect to Villarreal,” he said. “The stadium, team, coach — it was unbelievable what they set up.”

Liverpool will be playing in its 10th final in the top European club competition, and third in the last five seasons.

Villarreal won the Europa League for its first major title last season, beating Manchester United in the final. It was making only its fourth Champions League appearance, having reached the semifinals in 2006 and the quarterfinals in 2009, both times losing to Arsenal.

“We really wanted to give our fans their first Champions League final, and it hurts that we were not able to do it,” veteran Villarreal defender Raúl Albiol said. “But we’ll just continue to try and do things the way we have done them. It’s what brought us this far.”

Returning to the Champions League may be hard for Villarreal, though. The team is currently out of the qualification places in seventh place in the Spanish league with four matches to go — nine points behind fourth-place Atlético Madrid.

The loss also means there will be no first Champions League trophy for Emery, who had never made it past the round of 16 until now. He has four Europa League trophies in his career, including with Villarreal last season.

“Although we haven’t quite been able to take that last step to the final," Emery said, "we must continue on this path we are on.”