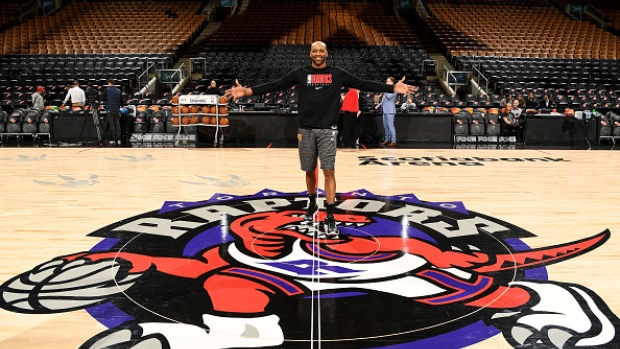 Hailed as a hero. Lustily booed as a villain. Given a standing ovation for his contributions to the game. Vince Carter has heard it all from the vocal crowd in Toronto.

Before the NBA suspended its season due to the COVID-19 pandemic, the former Raptors phenom and his current team, the Atlanta Hawks, were supposed to take on the Raptors at Scotiabank Arena on Friday. The game was going to be the 43-year-old Carter’s final in Toronto, as he's previously said he would retire at the end of the 2019-20 season.

Here is a look at a few of the memorable occasions Carter was loved or loathed by the Raptors faithful.

The Toronto Raptors played their first game at Scotiabank Arena (then called the Air Canada Centre) on Feb. 21, 1999 against the Vancouver Grizzlies, and Carter gave the sellout crowd a glimpse of what was to come. He had 27 points — including a couple of spicy dunks — six rebounds, five assists and four steals as the Raptors defeated the Grizzlies 102-87. Carter went on to win the NBA's rookie of the year award for the lockout-shortened 1998-99 season.

DROPPING 50 IN THE PLAYOFFS

The Raptors reached the second round of the playoffs for the first time in 2001, where they met superstar Allen Iverson and the favoured Philadelphia 76ers. After Iverson dropped 54 points in Game 2 of the series, it looked like Philly had the momentum heading back to Toronto.

Not to be outdone, Carter had 50 points in Game 3, leading Toronto to a 102-78 rout of the Sixers and a 2-1 lead in the best-of-seven series. Carter's night included nine three-pointers, tying what was then an NBA post-season record, and he threw in four blocks for good measure.

Fast-forward to Game 7, and narrative changed to Carter's missed last-second shot that would have won the series, and whether he should be blamed for the loss for having the audacity to attend his university graduation ceremony at North Carolina earlier that day.

But for a brief time it looked like the Raptors were a team built to advance to the NBA Finals. Toronto wouldn't reach the second round again until 2015.

Carter went from hero to heel in Toronto on Dec. 17, 2004, when he was traded to the New Jersey Nets amid reports that he was disillusioned with the Raptors' upper management and had stopped giving a full effort on the court. The thought of Carter quitting on the team raised the ire of Raptors' fans, and the underwhelming return from the trade of Alonzo Mourning (who refused to report and was immediately released), Aaron Williams, Eric Williams and two first-round draft picks rubbed salt in the wound.

When Carter made his first visit to ACC in New Jersey colours on April 15, 2005, the sold-out crowd let him have it with ear-shattering boos and a steady chorus of "V-C sucks!" chants. Unfazed, Carter scored 17 of his game-high 39 points in the third quarter and the Nets left town with a 101-90 victory. He would make a habit of putting in big performances north of the border in the years to come.

Forging a new identity under star forward Chris Bosh, the Raptors surged to their first Atlantic Division title in 2006-07 and made the playoffs for the first time in five years. Their first-round opponent? Carter and the Nets.

Toronto was ranked third in the Eastern Conference, and with home-court advantage was expected to win the series over the sixth-seeded Nets. But New Jersey ended up taking the best-of-seven set in six games, thanks in large part to winning the series opener on Toronto's turf. Carter had just 16 points on 5-of-19 shooting in the game, but a rabid Raptors crowd that wanted to see VC get his comeuppance instead got another dagger to the heart.

Carter's redemption in Toronto seemed like an impossibility at one time, but his transformation into respected league veteran, as well as many of the current crop of exceptional Canadian ballers citing him as an influence, has softened the hearts of many of those who once saw Carter as a traitor. When Carter and the Memphis Grizzlies visited Toronto on Nov. 19, 2014, he was moved to tears by a video tribute and subsequent standing ovation by a fan base finally ready to move on.

Sure, Carter was booed every time he touched the ball afterward. But a peace had finally been reached between the Raptors and their first superstar.