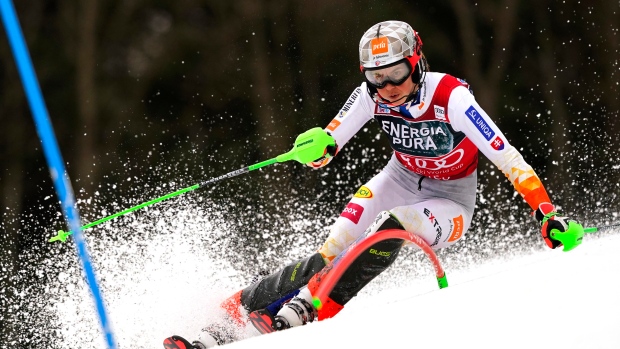 ZAGREB, Croatia (AP) — Only her Slovakian rival Petra Vlhova remained out of reach. Otherwise, Mikaela Shiffrin had a satisfying return to competition at a floodlit slalom Tuesday after testing positive for the coronavirus and missing two races last week.

The American trailed winner Vlhova by five-tenths of a second in the first World Cup race of the calendar year.

“I think I had really good skiing,” Shiffrin said. “Especially after the last two weeks it’s really wonderful to come back. That I could ski some of my best slalom is really cool.”

Shiffrin, who on Monday was cleared to race, was the only competitor in tough race conditions to finish within two seconds of Vlhova’s winning time as slalom world champion Katharina Liensberger in third was already a massive 2.11 seconds behind.

Two weeks ago, Shiffrin placed first and second, respectively, in two giant slaloms in France but tested positive for COVID-19 prior to two technical races in Austria the following week.

“After Courchevel my tank was totally empty, so I needed some time to rest — and then I got a lot of time to rest,” Shiffrin said. “It wasn’t really recovery and I wasn’t able to do any real exercises or training for 10 or more days.”

Vlhova won the slalom in the Lienzer Dolomites while Shiffrin was quarantining last week. She has won four of this season's five slaloms and leads the discipline standings by 140 points over Shiffrin with four races left. The American remained in the overall lead, 115 points ahead of her Slovakian rival.

Her huge deficit in the slalom ranking has made Shiffrin aware that she has “nothing to lose” as winning a seventh season title in her strongest discipline seems a far stretch to her.

“I am not in the competition for the globe anymore. There’s just too many things that have happened so far this year so I’m just trying to push every single run," the American said.

“These two runs today, it’s best training that I can get," she continued. "It’s good practice, physically and mentally. If nothing else, I’m getting back on track, step by step, and today is a really, really big step.”

Still, Vlhova remained a step ahead of Shiffrin for her third straight win in the traditional first slalom race of the calendar year, which the American had won four times between 2013 and 2019.

“It was really tough because conditions were not so perfect,” said Vlhova, who has won 11 of the last 17 World Cup slaloms. “Also, Zagreb is really long, so when you are entering the last pitch, you start to feel your legs, so you have to, like, breathe again and re-start again.”

The soft snow surface on the Crveni Spust course and gusts whipping up eddies of leaves made for challenging conditions, and the race had to be interrupted after 17 starters in the second run as organizers removed the finish line banner for safety reasons amid the increasing winds.

Liensberger was one of many racers who lost considerable time, or even skied out, going through a hole in the snow surface about 15 seconds into the run. Shiffrin and Vlhova picked a wider line to avoid the obstacle and clear the next gate without problems, while winning about a second on most competitors.

Wendy Holdener, who was third after the opening run, also struggled at that spot and dropped to fourth, just ahead of Ali Nullmeyer. The Canadian skier posted the fastest second-run time and improved from 17th for her career-best result.

At least seven racers, including three from the Swiss team, had to sit out the event after testing positive for COVID-19, which requires a 10-day quarantine and a negative test before being allowed back onto the circuit.

No spectators were allowed at the race on the outskirts of the Croatian capital, which usually is among the best-visited events on the women’s calendar.

The women's World Cup continues with a GS and a slalom in Kranjska Gora this weekend, an event that has been moved from another Slovenian resort, Maribor, because of a lack snow.