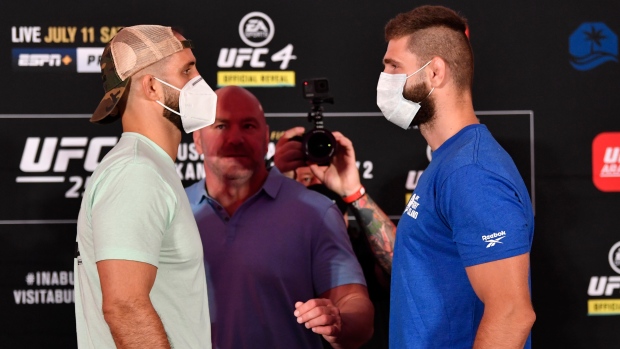 Before three championships are handed out on Fight Island in Abu Dhabi, light heavyweight contender and former title challenger Volkan Oezdemir will face Jiri Prochazka in the featured bout of the UFC 251 prelims. Catch the UFC 251 prelims LIVE tonight at 6 pm ET/3 pm PT on TSN1, TSN4 and TSN Direct.

Oezdemir earned the nickname “No Time” for two lightning-fast, highlight-reel victories that earned him a shot at then light heavyweight champion Daniel Cormier.

The 30-year-old defeated Canadian Misha Cirkunov via KO in just :28 seconds at Fight Night Stockholm in May of 2017 and followed that victory up with a :42 second KO win over Jimi Manuwa at UFC 214, two months later.

Oezdemir was ultimately unsuccessful in his title challenge, losing to Cormier via second-round TKO at UFC 220 in Boston.

The loss was the first of a three-fight losing streak that saw him fall to top competition in title challengers Anthony Smith and Dominick Reyes.

The Fribourg, Switzerland native has since righted the ship and comes into Saturday’s bout riding a two-fight winning streak with triumphs over Ilir Latifi and most recently, Aleksandar Rakic, who he defeated by split decision in Busan, South Korea last December.

Oezdemir is currently ranked No.7 in crowded light heavyweight division and could take a huge step towards earning another title shot with a victory in Abu Dhabi.

Prochazka will be making his promotional debut at UFC 251 but is a veteran fighter, currently holding an overall record of 26-3-1.

Prochazka tells UFC.com that he’s going to treat his promotional debut as he would any fight during his MMA career.

"I don’t want to do something more for this fight,” Prochazka said to UFC.com. “For me, it is very important, but every fight is a big moment for me. Every fight is important.”

If the Brno, Czech Republic fighter can get his arm raised to close out the prelims, he will instantly insert his name into the crowded light heavyweight picture.
Here is the entire UFC 251 Prelims card: