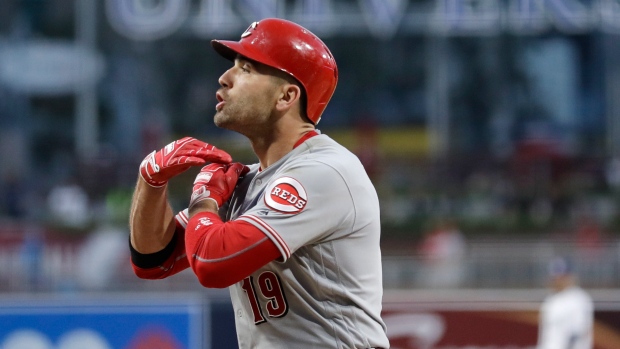 The Padres, who had a three-game lead in the NL West on Saturday, have lost four straight for the first time this year and trail the Los Angeles Dodgers by 1 1/2 games.

Votto, 35 and in his 14th big league season, was batting leadoff for the third straight game and just the fourth time in his career. He drove rookie Chris Paddack's third pitch to right-centre, his second.

Barnhart, batting ninth while starter Tanner Roark batted eighth, hit a two-run shot to right with two outs in the fifth. The homer was upheld after a video review. Winker homered off Phil Maton with one out in the ninth, his fifth.

Roark (1-0) earned his first win in his fourth start. He held the Padres to one run and four hits in 5 1/3 innings, struck out five and walked two. Raisel Iglesias struck out the side in the ninth for his third save.

The Padres put runners on first and second with one out in the sixth to chase Roark. Zach Duke came on and struck out Eric Hosmer before Robert Stephenson came on and allowed Manny Machado's ground-rule double. He then struck out Franmil Reyes to end the inning with runners on second and third.

Paddack (0-1) allowed three runs and three hits in six innings while striking out five and walking one in his fourth start. He struck out the side in the third, including Votto looking to end the inning.

Reds: RHP Anthony DeSclafani (0-1, 7.43) is scheduled to make his fourth start Friday night in the second game of the four-game series.