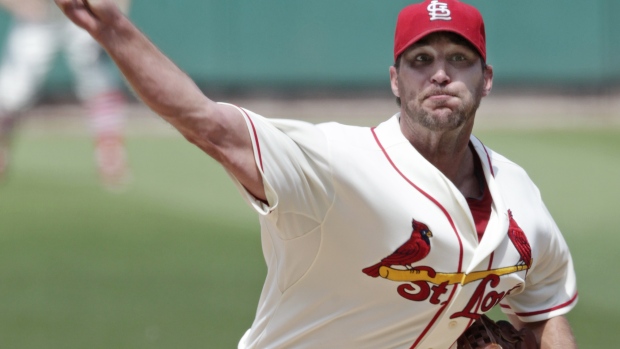 St. Louis, MO - Matt Holliday's one-out double in the eighth inning plated the go-ahead run to help the St. Louis Cardinals to a 4-1 victory over the streaking Philadelphia Phillies.

Matt Carpenter drew a leadoff walk off Phillies starter Cole Hamels (2-4) to begin the eighth, then Holliday laced a double into the gap of left center to give the Cardinals the lead.

St. Louis, which snapped a three-game losing streak, added on when Jhonny Peralta reached on a fielder's choice with one out. Peralta hit a sharp grounder back to shortstop Jimmy Rollins, who threw home in attempt to get Holliday at the plate, but catcher Carlos Ruiz couldn't hang on to the ball as he made the tag.

Matt Adams then poked a sacrifice fly to right that plated Yadier Molina to account for the final margin.

The run-scoring hit made a winner out of Adam Wainwright (10-3), who missed his last start due to tendinitis in his right elbow.

Wainwright won this pitchers' duel and tied Cincinnati's Alfredo Simon for the National League-lead in wins after going eight innings and allowing one run on six hits with seven strikeouts to help the Cardinals halt Philadelphia's five- game winning streak.

Hamels, meanwhile, took the tough-luck loss and had his scoreless innings streak snapped in the setback. He surrendered three runs -- two earned -- and struck out eight over 7 1/3 innings, but issued a season high-tying five walks.

Hamels, who had a career-best streak of 25 scoreless innings back in 2010, hadn't allowed a run over his last 23 2/3 frames entering the contest.

St. Louis put an end to the streak at 24 2/3 innings after a sacrifice fly to right from Adams in the second. Molina walked to lead off the inning, then Peralta's double down the left-field line put both runners in scoring position with no outs.

Adams lifted a high fly ball to right that allowed Molina to score and Peralta to advance to third. Hamels worked out of trouble, however, retiring Peter Bourjos on a bunt groundout and striking out Mark Ellis to end the frame.

Rollins answered in the top half of the third with a sacrifice fly of his own after a successful hit-and-run by Hamels put runners at the corners with no outs to tie the game.

Hamels, who had a pair of hits, and Wainwright each hit one-out doubles in the fifth but were stranded on base to keep it a tie game ... Wainwright entered the game with a 4-1 record and 2.41 ERA in his career against the Phillies ... Hamels has lasted at least seven innings in nine straight starts ... Rollins extended his hitting streak to 15 games with a leadoff single in the eighth ... Philadelphia was denied its first six-game winning streak since a seven- game jaunt from Sept. 5-12, 2012 ... The Phils went 0-for-5 with runners in scoring position, while St. Louis went 0-for-6 in those instances.