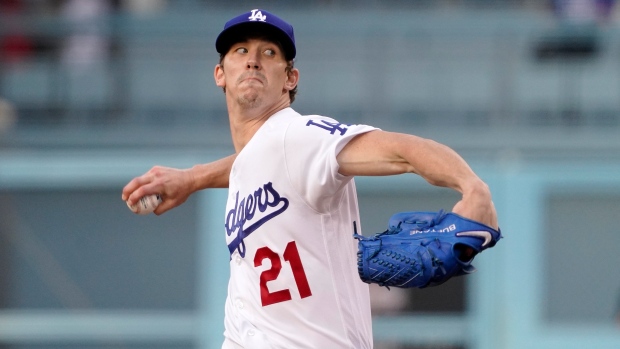 ATLANTA (AP) — The Los Angeles Dodgers say Max Scherzer will not start Game 6 of the NL Championship Series against the Atlanta Braves on Saturday night.

The Dodgers made the announcement on Friday night. They did not say why Scherzer will not start and but manager Dave Roberts told reporters Saturday that right-hander Walker Buehler will start on short rest in Game 6.

Buehler lasted just 3 1/3 innings and allowed four runs (two earned) in Game 3 of the series. According to Jon Heyman of the MLB Network, Scherzer is a possibility for Game 7 if it occurs.

Max Scherzer is a possibility for Game 7 (if it occurs). Buehler tonight for LA.

Scratching Scherzer was first reported by the Los Angeles Times.

Scherzer, a 37-year-old right-hander, is a three-time Cy Young Award winner acquired by the Dodgers from Washington on July 30.

He got his first career save on Oct 14 at San Francisco in Game 5 of the Division Series, throwing 13 pitches on two days' rest after throwing 110 pitches over seven innings during the Dodgers' 1-0 loss in Game 3.

Scherzer started Game 2 at the Braves on Sunday and did not get a decision in Atlanta's 5-4 win, throwing 79 pitches over 4 1/3 innings. He said after that game he had a bit of a dead arm but said at the time he did not think it was that big of a deal.