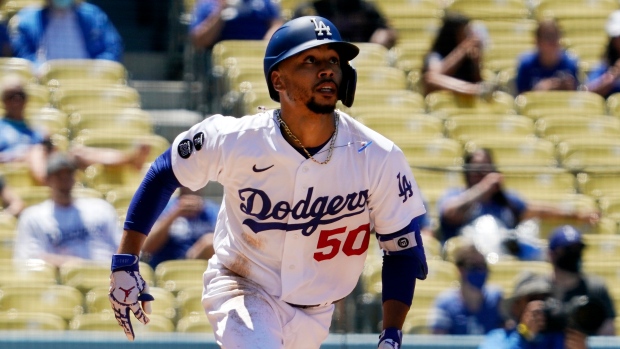 The Dodgers' bullpen let six straight Rangers reach base and allowed three runs in the ninth. Kenley Jansen still got three gritty outs with the bases loaded to end it.

Manager Dave Roberts was thoroughly unhappy with his team's performance. Los Angeles still moved within one game of the overall NL lead.

The standards are simply higher when you're the defending World Series champions, and the Dodgers are winning even when they aren't meeting their own expectations.

Walker Buehler pitched six scoreless innings of five-hit ball to remain unbeaten since 2019, and the Dodgers held off Texas 5-3 on Sunday when Jansen escaped a bases-loaded, nobody-out jam.

“Today, I don’t think we played a very good baseball game, and we came away with the win,” Roberts said.

Buehler (6-0) survived a rough first inning and made it through his second straight scoreless start, while his teammates cobbled together enough runs for a comfortable win. But the Dodgers’ bullpen struggled in the ninth until Jansen belatedly throttled the rally.

Jason Martin and Isiah Kiner-Falefa drove in runs in the ninth off reliever Phil Bickford. Jansen came on and gave up an RBI single to Willie Calhoun on his first pitch before Texas loaded the bases.

The veteran closer then got two popups before Nick Solak grounded out to end a nine-pitch at-bat and Jansen's 15th save. No wonder Roberts was frustrated, although he declined to give specifics.

“Throughout the game, there are some things we need to get better at,” Roberts said. “It’s just good that Kenley came in and shut the door.”

Zach McKinstry had a two-run double while going 3 for 3 with a walk, and Gavin Lux added his own RBI double in the fifth victory in six games. The Dodgers (39-26) moved right behind San Francisco (40-25) atop the division and secured the series win after these clubs traded 12-1 victories in the first two games.

One night after Texas ended its franchise-record-tying 16-game road losing streak, the Rangers fell to an MLB-worst 8-25 in interleague play over the past two seasons. They have lost 14 of 17 despite avoiding their eighth shutout loss of the season with that exciting ninth.

Buehler wasn't dominant by his own lofty standards, but he lasted at least six innings for the 13th time in his 13 starts this season — a feat he also accomplished in his final two playoff starts last season. He hasn't lost a decision since September 2019, going 10-0 in 28 appearances.

But after throwing seven scoreless innings at Pittsburgh last Tuesday, Buehler had to throw 33 pitches in the first against Texas. He walked the bases loaded, and the Rangers stole two bases before Buehler escaped without allowing a run.

“With Walker Buehler, we know this guy is good, and we had him on the ropes in the first inning,” Texas manager Chris Woodward said. “Getting a big hit there changes the entire game.”

The Dodgers took the lead two batters later when Betts walked and Lux drove him in with a double to the left-center gap off Dane Dunning (2-5).

Betts sliced his seventh homer into the short right field porch in the third, giving respite to the former AL MVP during a difficult stretch. Betts entered the game batting .225 in June.

“I don’t know exactly what I need to do, which is the frustrating part, but I just have to find a way,” Betts said.

McKinstry drove in two more runs with a two-out double later in the inning. The rookie also had two singles and a walk, ending his 2-for-23 slump since returning from his oblique muscle injury.

“I didn’t establish the zone at all,” Dunning said. “Wasn’t commanding the sinker. Even pitches that I threw well, that ended up doing good, was missed spots. Off the top of my head, I can only remember one good fastball I threw. That was it.”

The Rangers placed veteran OF Khris Davis on unconditional release waivers, five days after designating him for assignment. The former Oakland slugger began the season on the injured list and then batted .157 in 61 plate appearances with his new team.

Rangers: After a day off, right-hander Kyle Gibson (4-0, 2.13 ERA) looks to continue his stellar season in a series opener Tuesday at Houston. Gibson is among the AL leaders in ERA, opponents' batting average (.196) and WHIP (1.00).

Dodgers: Tony Gonsolin (0-0, 5.40 ERA) hopes to rebound from a rough 2021 debut when LA opens a three-game series against Philadelphia at Dodger Stadium. Gonsolin got just five outs in Pittsburgh last week after missing the first two months with a shoulder injury.