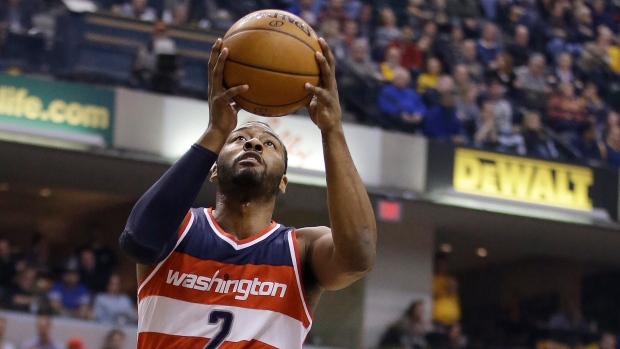 INDIANAPOLIS - John Wall got the Wizards off and running, and they kept it going even when he sat down.

Wall had 28 points, seven rebounds and eight assists to lead Washington to a 118-104 victory over the Indiana Pacers on Friday night.

The Wizards outscored the Pacers 35-19 in the second quarter en route to their fourth straight victory.

"We came into this game and wanted to be more physical and aggressive," Wall said. "We've been playing good defence the last couple of weeks and we know that has to be our identity."

The Pacers turned the ball over six times in the first eight minutes and fell behind 11-4. Indiana rallied to take a 27-24 lead at the end of the first quarter. It would be the Pacers' last lead of the game.

Washington got a huge lift from its bench when Wall came off the floor. The Wizards' reserves combined for more than half of their points, scoring 69.

"Our bench was fantastic tonight," Wizards coach Randy Wittman said. "We've got guys, plug-in guys, you know? We've got a group of guys that believe, who come out and play with the intensity and effort every night like that."

Beal made four 3-pointers, while DeJuan Blair, Gary Neal and Ramon Sessions all scored in double figures off the bench.

Frustration set in for the Pacers. George Hill made a poor pass while Indiana was trailing by double digits and it resulted in a quick layup by Sessions. The Pacers called timeout and Indiana's starters came out of the game, their heads hanging as they walked to the sideline.

George said the Pacers played the entire 48 minutes Friday night the same way they played the final three in Boston on Wednesday night, when they gave up a six-point lead and eventually lost by nine points.

"Poor effort. Poor effort on both ends of the floor. They took the fight to us. It's like they were comfortable from the get-go," George said.

"You can't let a team get comfortable, especially when it's the point guard and their best player. That's the head of the snake. We should never lose games like this, especially at home, where a team comes in and pushes the tempo and establishes how they're going to play."

Wizards: Washington is 14-4 this season when it has 25 or more assists. The Wizards finished with 26 on Friday.

Pacers: Indiana is 3-15 when it allows opponents to score 100 or more points.