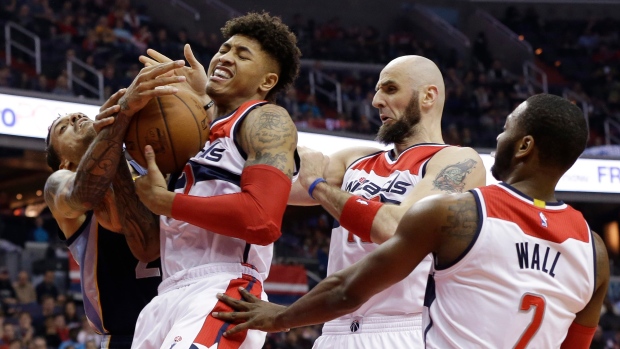 WASHINGTON - With his team limited to just nine players by injuries, John Wall once again took charge and directed the Washington Wizards to victory.

Wall had 14 points and 14 assists to help the Washington Wizards beat the Memphis Grizzlies 100-91 on Wednesday night.

This was Wall's fourth consecutive double-double and the Wizards have won three games. Memphis also saw its two-game winning streak end even though Washington coach Randy Wittman again could use only nine players.

And Wall led the way, handing out assists in a variety of situations.

"Whether they're missing shots or making shots, I still believe in these guys," Wall said. "Giving them the ball in certain situations, and they're kind of just getting into a rhythm and making shots. "

Wall got a career-high 19 assists in Washington's last game, a 113-99 victory over Sacramento on Monday. He also helped six of the nine Washington players finish in double figures.

"John again doesn't have to carry the load for us scoring (but) he still ended with 14 assists," Wittman said. "John has a sense for needing to take over or to dish the ball."

Marcin Gortat had his own double-double with 12 points and 12 rebounds. Garrett Temple (20 points), Ramon Sessions (16), Jared Dudley (11) and Kelly Oubre Jr. (10) all pitched in. Temple became the first NBA player to score at least 20 in three straight games after not reaching that level for his first 250 contests.

They were especially happy to gain some revenge on Memphis, who handed Washington a 112-95 defeat on Dec. 14.

"We are just taking it game by game and giving it everything that we have," he said. "We came out ready to play. We pretty much out-worked them."

Memphis scored the game's first six points, but Washington took the lead less than two minutes later and never lost it. The Wizards stretched the margin to 25-18 after one and then broke it open by scoring the first 11 points of the second quarter.

"They were getting too many easy lay-ups because John Wall was able to get to the rim and get to the pain and make plays," Conley said. "When he's able to be free like that and make plays, they are a very, very tough team to beat."

The Grizzlies just could not get enough going on offence in this game, scoring less then 20 points in two of the four quarters and making only three of 17 three-points. "Our inability to score at times...(hurt)," Memphis coach Dave Joerger said. "It was a tough night for us offensively."

Wittman repeatedly talked about how tough his team played at both ends in this game, which was even more impressive to him due to how short-handed the Wizards played. "It all starts with our intensity," he said. "Our intensity is off the charts right now."

Grizzlies: Mario Chalmers was tossed after getting two technicals with 10:11 left in the second quarter. He had no points in five minutes played. ... Joerger noticed the improved parity of the Eastern Conference, where the top 10 teams are separated by just 4 1/2 games. "They are improved. I think there's a lot of parity, there's a lot of good teams," he said.

Wizards: Washington signed guard/forward Jarell Eddie and waived centre Ryan Hollins on Wednesday. Eddie was averaging 14.1 points in 11 games with Austin of the D-League this season. Hollins was signed on Nov. 30 and played in five Washington games, averaging 1.6 points. ...The Wizards had five players out with injuries, starting with Bradley Beal and Otto Porter. Gary Neal missed Monday's win but he made it back for this game, scoring five points.

Grizzlies: On the road versus Charlotte on Saturday.

Wizards: At the Nets on Saturday.